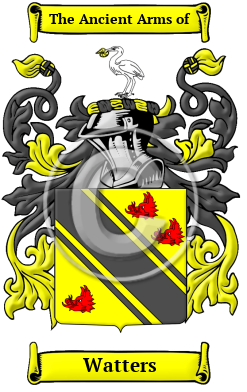 Watters is one of the names carried to England in the great wave of migration from Normandy following the Norman Conquest in 1066. It is based on the Germanic personal name Walter. The name is composed of the elements wald, meaning rule and heri, meaning army. [1] [2]

As far as the Watters variant is concerned, "upon the adoption of surnames by the common people, a person who resided near such a place would be called William or John Atte-Water, still retained in Attwater; but on the omission of the preposition in the XV. century, the name was pluralized to Waters. " [3]

"Water was the normal medieval pronunciation of Walter." [4]

Early Origins of the Watters family

The surname Watters was first found in Cambridgeshire where they held a family seat from early times as Lords of the manor or Crowhurst.

Walter of Lorraine (d. 1079), was Bishop of Hereford, a native of Lotharingia or Lorraine, was chaplain of Edith or Eadgyth (d. 1075), the Confessor's queen, and as a reward of his industry was appointed to the bishopric of Hereford at Christmas 1060. [5]

Walter of Palermo (fl. 1170), was Archbishop of Palermo, primate and chancellor of Sicily, and was sent to Sicily by Henry II of England as an instructor for young William II of Sicily. [5]

Hubert Walter (c.1160-1205) was Archbishop of Canterbury, and Lord Chancellor. Weeton in Lancashire was an early home of the family. "This place, in Domesday Book called Widetun, was early in the family of Walter." [6]

"The church [of Woolvercott in Lancashire], situated on the bank of the Isis, has a sepulchral chapel on the north side, containing a stately monument to the family of Walter, of whom David Walter was High Sheriff of the county, and commanded a regiment of horse under Charles I. in the parliamentary war." [6]

About the same time, Greenalgh with Thistleton, again in Lancashire was home to another branch of the family. It was here that the manor of Greenalgh-cum-Thistleton was held in the reign of Charles I. [6]

As mentioned above, the surnames Walter and Watter were interchangeable so accordingly early rolls had a mixture of phonetic entries, both as a forename and surname.

The first record for the family was found in 1066 where the ancient Latin form of the name was listed, Walterusepiscopus. This entry was made at the time of the Conquest. Twenty years later, Robertus filius Walterii, Galterii was listed in the Domesday Book of 1086. Later Galterus le Lingedraper was listed at Oseney, Oxfordshire in 1210 and Petrus Walterus was listed at Bury St Edmunds, Suffolk in 1182. The Pipe Rolls for 1191 in Suffolk included an entry for Petrus Walteri and Geoffrey Walter was listed in the Subsidy Rolls for Sussex in 1296. [4]

Early History of the Watters family

Norman surnames are characterized by a multitude of spelling variations. The frequent changes in surnames are largely due to the fact that the Old and Middle English languages lacked definite spelling rules. The introduction of Norman French to England, as well as the official court languages of Latin and French, also had pronounced influences on the spelling of surnames. Since medieval scribes and church officials recorded names as they sounded, rather than adhering to any specific spelling rules, it was common to find the same individual referred to with different spellings. The name has been spelled Walter, Walters, Watter, Watters, Walthew, Wattis and others.

Outstanding amongst the family at this time was John Walter or FitzWalter (d. 1412?), an early astrologer, educated at Winchester and Oxford. He died at Winchester, and was buried there about 1412. [5] Sir John Walter (1566-1630), was an English judge, second son of Edmund Walter of Ludlow, Shropshire. [5] Henry...
Another 48 words (3 lines of text) are included under the topic Early Watters Notables in all our PDF Extended History products and printed products wherever possible.

In the United States, the name Watters is the 3,077th most popular surname with an estimated 9,948 people with that name. [7]

Migration of the Watters family to Ireland

Some of the Watters family moved to Ireland, but this topic is not covered in this excerpt.
Another 50 words (4 lines of text) about their life in Ireland is included in all our PDF Extended History products and printed products wherever possible.

Watters migration to the United States +

Many English families emigrated to North American colonies in order to escape the political chaos in Britain at this time. Unfortunately, many English families made the trip to the New World under extremely harsh conditions. Overcrowding on the ships caused the majority of the immigrants to arrive diseased, famished, and destitute from the long journey across the stormy Atlantic. Despite these hardships, many of the families prospered and went on to make invaluable contributions to the development of the cultures of the United States and Canada. Early North American immigration records have revealed a number of people bearing the name Watters or a variant listed above:

Watters Settlers in United States in the 17th Century

Watters Settlers in United States in the 18th Century

Watters Settlers in United States in the 19th Century

Watters Settlers in Canada in the 19th Century

Watters Settlers in Australia in the 19th Century

Watters Settlers in New Zealand in the 19th Century