The English county of Cornwall is located in the southwest of England and as of 2019 it had a population of 568,210.[1] The Cornish People have a rich Celtic heritage. Cornwall was originally home to the people known as the Dumnonians, who were comprised of three tribes of ancient Britons known as the Veniti, the Curiovolitae, and the Asismii. They were akin to their Welsh neighbors to the north, who also spoke a Brythonic Celtic language, and they were the root stock of the Breton people, who settled in Brittany (French: Bretagne) in northwestern France in the 4th century.[2] 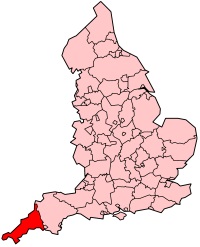 The region has historically been famed for its huge deposits of tin, which continued to be profitably mined until the 19th century.[4] It was partially this source of wealth that first attracted the attention of the Roman Empire, which first sent expeditions, led by Julius Cæsar in 55 BC, and then invaded the island nation under Claudius in 43 AD. The province of Britannia was subsequently established.

However, after nearly four centuries of rule, Brittany was largely abandoned by the Romans during the early 5th century, when the imperial legions were recalled to Rome in a vain attempt to fend off the conquest of the empire by barbarian tribes. Those Romans that remained were expelled by the Britons around 410 AD.[5]

The Romans were soon replaced by new overlords. During the 5th and 6th centuries, Teutonic tribes led by the Angles and the Saxons began to settle in England.

The newcomers began the subjugation of the Celtic inhabitants; those Britons who were not enslaved or massacred were slowly driven out of their homelands, despite a great victory they scored over the Anglo-Saxons in 500 AD, at Mount Badon in the present-day county of Dorset. By 650 AD the Anglo-Saxons had entrenched themselves in eleven kingdoms, including Northumbria, Mercia, Wessex, Kent, Essex, Sussex and East Anglia, which were collectively known as the Heptarchy.[7]

Meanwhile, the Britons had retreated to the regions which became known as Cornwall and Wales in the southwest of the island. The name Cornwall is derived from the Celtic tribal name Cornovii, which means peninsula people, and the Old English word walh, which means Briton.

The Birth of Wessex

Wessex emerged as the dominant Anglo-Saxons kingdom during the 9th century, when Egbert, King of Wessex, wrested control of most of the southern lands from the Mercians in 825.

The Cornish people persistently defended their land against the Anglo-Saxons, and allied themselves with the Vikings who had begun to plunder and settle Britain in 793. The Britons of Cornwall joined an army of marauding Danes and invaded Wessex in 838, only to be defeated by Egbert at the Battle of Hingston Down.

From then on, Cornwall was under the control of the Anglo-Saxons, despite a revolt in 926 that was put down by Æthelstan, King of Wessex, who consolidated his position as King of England in 944.[8] 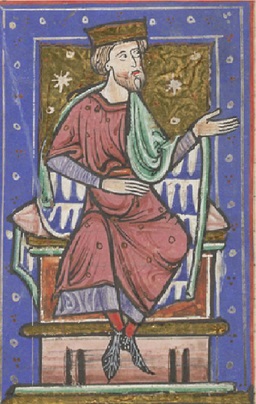 The supreme position of the Anglo-Saxons was not to last much beyond a century, for in 1066, the forces of King Harold II were defeated by those of Duke William of Normandy at the Battle of Hastings.

The Norman Conquest marked a new era in the history of England. New cultural, ecclesiastical, and commercial links were established with the continent. The Feudal System was introduced, and the Norman aristocracy displaced the Old Anglo-Saxon thegns. William the Conqueror granted almost all of Cornwall to his half-brother Count Robert of Montain.

The region went on to become known as the great duchy of Cornwall during the time of Edward the Black Prince, who lived during the 14th century. His nickname, The Black Prince, has an unclear origin. It is speculated it may have been created due to the inky color of his armor, although there is little evidence of this, [10] or because of his brutal reputation.[11] 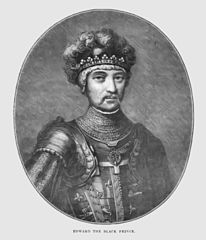 Edward the Black Prince, the eldest son of Edward III. [12]