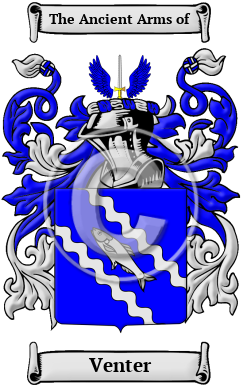 The distinguished surname Venter is derived from the Middle English word "aventurous," meaning "the venturous." [1]

Another source "suggests La Ventrouse in the arrondissement of Montagne, Normandy, as the home of the family." [2]

Early Origins of the Venter family

Some records point to Cambridgeshire, where the family was first referenced in the 13th century when they held a family seat at Wittlesford.

The Venters variant is typically found in Scotland where the name is "current in Fife," but like the English variants, there is much debate as to the origin. [4]

Early History of the Venter family

Sound was what guided spelling in the essentially pre-literate Middle Ages, so one person's name was often recorded under several variations during a single lifetime. Also, before the advent of the printing press and the first dictionaries, the English language was not standardized. Therefore, spelling variations were common, even among the names of the most literate people. Known variations of the Venter family name include Ventris, Ventres, Venters, Ventrus, Ventras, Venture, Ventures, Ventrice, Ventriss, Fentress, Fentris and many more.

Distinguished members of the family include Sir Peyton Ventris (1645-1691), English judge and politician. He was the "eldest surviving son of Edward Ventris, barrister-at-law, of Gray's Inn and Granhams, Great Shelford, Cambridgeshire (a scion of a Bedfordshire family of some antiquity), by Mary, daughter of John Breuse of Wenham Hall, Suffolk, was born at Wenham Hall in November 1645. He was admitted on 3 Feb. 1653-1654 a member of the Middle Temple, where he was called to the bar on 2 June 1661. Failing to secure a practice, he devoted himself to...
Another 92 words (7 lines of text) are included under the topic Early Venter Notables in all our PDF Extended History products and printed products wherever possible.

In South Africa, the name Venter is the 52nd most popular surname with an estimated 78,988 people with that name. [5]

Venter migration to the United States +

For political, religious, and economic reasons, thousands of English families boarded ships for Ireland, Canada, the America colonies, and many of smaller tropical colonies in the hope of finding better lives abroad. Although the passage on the cramped, dank ships caused many to arrive in the New World diseased and starving, those families that survived the trip often went on to make valuable contributions to those new societies to which they arrived. Early immigrants bearing the Venter surname or a spelling variation of the name include:

Venter Settlers in United States in the 18th Century

Venter Settlers in United States in the 19th Century