Near the end of the 12th century, under the ruling of King Henry II, disputes over land were settled only after both parties stood before the royal courts, and therefore the final decision was given royal sanction. This written agreement was known as the foot of fine.

Typically three copies of the agreement were written as a chirograph. Each party received a copy and the third was kept by the Treasury, and since this was often written at the bottom of the chirograph it was called the foot of fine. Feet of Fines became common practice in 1195 and lasted until the Fines and Recoveries Act of 1833, at which point the practice was abolished.[1]

The remaining feet of fines can be found today at The National Archives in London. 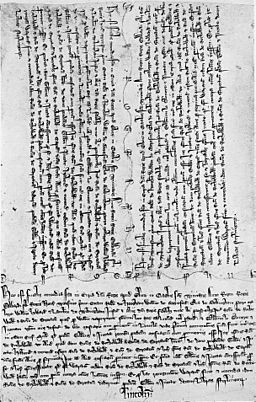