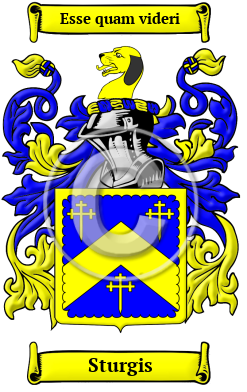 The Sturgis name is said to be derived from an old Anglo Saxon name "Styrgar" which appeared in Mercia in ancient times. "Styrgar" denoted a battle spear.

Early Origins of the Sturgis family

The surname Sturgis was first found in Northhamptonshire where they held a family seat. This Anglo Saxon family name appears to have been undisturbed by the Norman invasion of 1066 A.D., retaining their estates in Northamptonshire. Clipston. Their seat, was not granted to one of the Norman nobles after the victory at Hastings, and remained the 'King's Land' according to the Domesday Book, [1] a survey taken by Duke William of Normandy in 1086 A.D.

Early History of the Sturgis family

This web page shows only a small excerpt of our Sturgis research. Another 66 words (5 lines of text) covering the year 1634 is included under the topic Early Sturgis History in all our PDF Extended History products and printed products wherever possible.

More information is included under the topic Early Sturgis Notables in all our PDF Extended History products and printed products wherever possible.

In the United States, the name Sturgis is the 4,542nd most popular surname with an estimated 7,461 people with that name. [2]

Sturgis migration to the United States +

Sturgis Settlers in United States in the 17th Century

Sturgis Settlers in United States in the 18th Century

Sturgis Settlers in United States in the 19th Century

Sturgis Settlers in United States in the 20th Century

Sturgis Settlers in West Indies in the 17th Century

Suggested Readings for the name Sturgis +