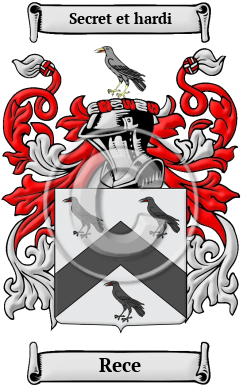 The origins of the Welsh name Rece go back to those ancient Celts known as the Britons that once occupied the hills and Moors of Wales. This old Welsh surname is from the Welsh personal name Rhys, which also took the forms Rice and Rees. This name was originally derived from the Old Welsh forename Ris, which means ardour. [1]

Early Origins of the Rece family

The surname Rece was first found in Carmarthenshire (Welsh: Sir Gaerfyrddin), located in Southwest Wales, one of thirteen historic counties and presently one of the principal area in Wales, where they held a family seat from very early times.

The first record of the family in early rolls was found in Saxon times where the mononym Hris in Cambridgeshire in 1052. [1] Rees is recorded in the Domesday Book of 1086 in Cheshire. [3] The Pipe Rolls of 1178 list Resus filius Griffini in Devon and a few years later, Griffinus filius Res was listed in the Pipe Rolls of Shropshire in 1198, while the same rolls included an entry for Griffinus Ris in Gloucestershire. In Lincolnshire, William Res was recorded in the Curia Regis Rolls for 1203, John Rees was listed in the Feet of Fines for Suffolk in 1288, and Walter Rys was found in the Subsidy Rolls for Worcestershire in 1327. [1]

Early History of the Rece family

There are relatively few surnames native to Wales, but they have an inordinately large number of spelling variations. Early variations of Welsh surnames can be explained by the fact that very few people in the early Middle Ages were literate. Priests and the few other literate people were responsible for recording names in official documents. And because most people could not specific how to properly record their names it was up to the individual recorder of that time to determine how a spoken name should be recorded. Variations due to the imprecise or improper recording of a name continued later in history when names originally composed in the Brythonic Celtic, language of Wales, known by natives as Cymraeg, were transliterated into English. Welsh names that were documented in English often changed dramatically since the native language of Wales, which was highly inflected, did not copy well. Occasionally, however, spelling variations were carried out according to an individual's specific design: a branch loyalty within the family, a religious adherence, or even patriotic affiliations could be indicated by minor variations. The spelling variations of the name Rece have included Rice, Rees, Rhys and others.

Prominent amongst the family during the late Middle Ages was Richard Rice or Price (fl. 1548-1579), Welsh author, son of Robert ap Rhys ap Maredudd of Foelas and Plas Iolyn, Denbighshire. Hugh Rhys (or Rice) ap Thomas (1449-1525), supporter of Henry VII, third son of Thomas ap Gruffydd ap Nicolas of Newton, Carmarthenshire, and his wife Elizabeth, daughter of Sir John Gruffydd of Abermarlais, was born in 1449. When about twelve years of age he accompanied his father to the court of Philip of Burgundy; the two returned to Wales about 1467, and not long after the father and his sons Morgan and...
Another 214 words (15 lines of text) are included under the topic Early Rece Notables in all our PDF Extended History products and printed products wherever possible.

Migration of the Rece family to Ireland

Some of the Rece family moved to Ireland, but this topic is not covered in this excerpt.
Another 110 words (8 lines of text) about their life in Ireland is included in all our PDF Extended History products and printed products wherever possible.

Rece migration to the United States +

North America in the 1800s and 1900s saw the arrival of many Welsh people hoping to share in the wealth of land, work, and freedom that they felt North America held. Those who made the journey often attained those expectations, but only through an enormous amount of hard work, perseverance, and often a bout of good luck. These immigrants helped contribute to the growth of industry, commerce, and culture of both Canada and the United States. Discovered in the immigration and passenger lists were a number of people bearing the name Rece:

Rece Settlers in United States in the 19th Century

Rece Settlers in Australia in the 19th Century