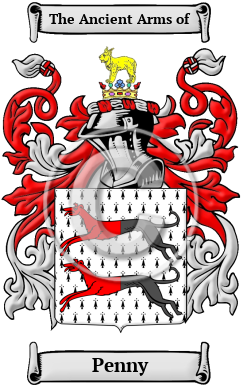 The ancient Anglo-Saxon culture once found in Britain is the soil from which the many generations of the Penny family have grown. The name Penny was given to a member of the family who was a someone as a personal name or literally derived from the coin. It was derived from the Old English "Penig," denoting a coin. The penny was the only unit of coinage in England until the early 14th century, and as such was a coin of considerable value.

While the Saxon heritage is the generally accepted origin of this family, another source points to a possible Norman origin as the Magni Rotuli Scaccarii Normanniae lists Serlo Penné in Normandy in 1180-1195. [1]

Early Origins of the Penny family

The surname Penny was first found in Northampton where they held a family seat from very early times, and before the 12th century had become associated with London and had moved north into Scotland.

Some of the first records of the family in Scotland include: Johannes Peny, a witness in Elgin in 1343; Mr. John Peny, a Scottish clerk, having a safe conduct in England in 1362; and a later John Peny who had a grant of the fulling mill of Ballernache in Perthshire in 1375. [2]

Down in Lancashire, an ancient branch of the family was found. "The neat village of Penny-Bridge, so called perhaps from the British word Pen, 'the head,' was the seat of the family of Penny. The chapel, dedicated to the Blessed Virgin Mary, was built and endowed by William Penny, Esq., was consecrated in 1791." [3]

The Hundredorum Rolls of 1273 included various early spellings in many counties: Hurtin Peni in Kent; Alexander Penny in Cambridgeshire; Agatha Peni in Oxfordshire; and Robert Peni in Kent. [4]

"In the reign of Anne, John Penny, Esq., lived at Charlton Musgrove, and at the same time a burgess of Glastonbury bore this name." [6]

Early History of the Penny family

Sound was what guided spelling in the essentially pre-literate Middle Ages, so one person's name was often recorded under several variations during a single lifetime. Also, before the advent of the printing press and the first dictionaries, the English language was not standardized. Therefore, spelling variations were common, even among the names of the most literate people. Known variations of the Penny family name include Penny, Penney, Pennie, Penne and others.

Distinguished members of the family include John Penny (d. 1520), English Bishop of Carlisle. He was educated at Lincoln College, Oxford, and at some unknown time became LL.D. of Cambridge. In 1477 he was a canon at the abbey...
Another 38 words (3 lines of text) are included under the topic Early Penny Notables in all our PDF Extended History products and printed products wherever possible.

Migration of the Penny family to Ireland

Some of the Penny family moved to Ireland, but this topic is not covered in this excerpt.
Another 70 words (5 lines of text) about their life in Ireland is included in all our PDF Extended History products and printed products wherever possible.

Penny migration to the United States +

For political, religious, and economic reasons, thousands of English families boarded ships for Ireland, the Canadas, the America colonies, and many of smaller tropical colonies in the hope of finding better lives abroad. Although the passage on the cramped, dank ships caused many to arrive in the New World diseased and starving, those families that survived the trip often went on to make valuable contributions to those new societies to which they arrived. Early immigrants bearing the Penny surname or a spelling variation of the name include :

Penny Settlers in United States in the 17th Century

Penny Settlers in United States in the 18th Century

Penny Settlers in United States in the 19th Century

Penny Settlers in United States in the 20th Century

Penny Settlers in Canada in the 17th Century

Penny Settlers in Canada in the 18th Century

Penny Settlers in Canada in the 19th Century

Penny Settlers in Australia in the 19th Century

Penny Settlers in New Zealand in the 19th Century

The British first settled the British West Indies around 1604. They made many attempts but failed in some to establish settlements on the Islands including Saint Lucia and Grenada. By 1627 they had managed to establish settlements on St. Kitts (St. Christopher) and Barbados, but by 1641 the Spanish had moved in and destroyed some of these including those at Providence Island. The British continued to expand the settlements including setting the First Federation in the British West Indies by 1674; some of the islands include Barbados, Bermuda, Cayman Island, Turks and Caicos, Jamaica and Belize then known as British Honduras. By the 1960's many of the islands became independent after the West Indies Federation which existed from 1958 to 1962 failed due to internal political conflicts. After this a number of Eastern Caribbean islands formed a free association. [19]

Penny Settlers in West Indies in the 17th Century

Historic Events for the Penny family +