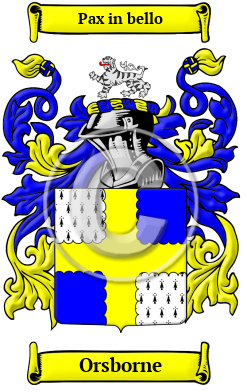 The Orsborne surname itself is thought to be derived from an Old Norse personal name "Asbjorn" made up of "às," meaning "god" and "bjorn," or "bear." The name became Osbern in old English. Bearers of this name also came to Britain from Normandy, and over the centuries have become indistinguishable from those who predated the Norman invasion. "The name is found in England before the Conquest and may be of direct Scandinavian origin. It was also common in Normandy whence it was often brought over by Normans after the Conquest." [1]

Early Origins of the Orsborne family

The surname Orsborne was first found in Kent where "this family descends from a Kentish branch of the family of Fitz-Osberne, seated in that county early in the reign of Henry VI., when Thomas Osberne appeared to a writ of Quo warranto for the Abbey of Dartford." [3] His grandfather was Richard Fitz-Osberne, or Fitz-Osbert who held a fief from Earl Bigot in 1165. Richard's father was Stephen Fitz-Osbert fl. 1152 was son of William Fitz-Osbert, son of Osberne Fitz-Letard who held lands from Odo of Bayeaux in 1086. [3]

Early History of the Orsborne family

Distinguished members of the family include Francis Osborne (1593-1659), an English essayist; Dorothy Osborne, Lady Temple (1627-1695), a British writer of letters and wife of Sir William Temple, 1st Baronet; Sarah Osborne (Osbourne, Osburne, or Osborn) (c. 1643-1692) (nee Warren), one of the first three...
Another 44 words (3 lines of text) are included under the topic Early Orsborne Notables in all our PDF Extended History products and printed products wherever possible.

Migration of the Orsborne family to Ireland

Some of the Orsborne family moved to Ireland, but this topic is not covered in this excerpt.
Another 127 words (9 lines of text) about their life in Ireland is included in all our PDF Extended History products and printed products wherever possible.

Orsborne migration to the United States +

Orsborne Settlers in United States in the 19th Century