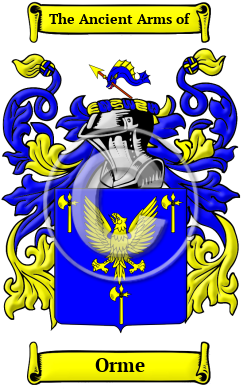 The ultimate origins of this name appear to be Nordic, where Orme derives from the Old Norse word "Ormr," meaning "Serpent" or "Dragon." It is certainly not unlikely that the name came to Normandy with the Viking invasions of Rollo in 911, and then making its way to Britain with the Norman invasion of 1066. The name also existed in France, coming from the Old French "orme," which meant "an elm tree." It also likely that some of the instances of Orme in Britain were as a result of Danish, and Swedish contact along the Eastern shores of England and Scotland.

Early Origins of the Orme family

The surname Orme was first found in Yorkshire where Orm was recorded in the Domesday Book of 1086. [1]In Lancashire, the Pipe Rolls of 1169 list Orm de Hedoc. [2] Here, the family claim descent from the parish of Ormskirk. "Ormskirk is not found in the Domesday survey; but, according to very credible tradition, the parish belonged to Orm, the Saxon proprietor of Halton, who, driven from his possessions in Cheshire, established himself in Lancashire, and, by his marriage with Alice, daughter of Herveus, a Norman nobleman, ancestor of Theobald Walter, obtained large estates in this county. He was the founder, no doubt, of the church; the word kirk, with his own name, constituting the name of the parish." [3]

Early History of the Orme family

Another 32 words (2 lines of text) are included under the topic Early Orme Notables in all our PDF Extended History products and printed products wherever possible.

Migration of the Orme family to Ireland

Some of the Orme family moved to Ireland, but this topic is not covered in this excerpt. More information about their life in Ireland is included in all our PDF Extended History products and printed products wherever possible.

Orme migration to the United States +

Orme Settlers in United States in the 17th Century

Orme Settlers in United States in the 18th Century

Orme Settlers in United States in the 19th Century

Orme Settlers in Australia in the 19th Century

Historic Events for the Orme family +