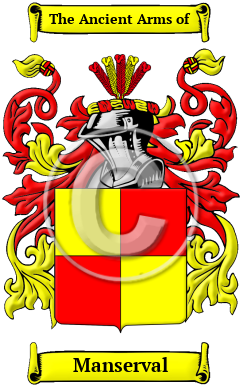 The Norman Conquest of England in 1066 brought much change to the island nation, including many immigrants with new names. Among these immigrants were the ancestors of the Manserval family, who lived in Mandeville, near Valognes, Cotentin, Normandy. In Mandeville, the Norman Manserval family were nobles who possessed a castle and vast estates. [1]

Early Origins of the Manserval family

The surname Manserval was first found in Wiltshire where they were anciently granted lands by William Duke of Normandy for their assistance at the Battle of Hastings in 1066 A.D. Geoffrey (Goisfrid) de Mandeville (c.1100) was an important Domesday tenant-in-chief; he was granted large estates in Essex, and in ten other shires by William, and was Constable of the Tower of London. [3]

Early History of the Manserval family

This web page shows only a small excerpt of our Manserval research. Another 89 words (6 lines of text) covering the years 1357, 1357, 1371, 1189, 1670 and 1733 are included under the topic Early Manserval History in all our PDF Extended History products and printed products wherever possible.

Outstanding amongst the family at this time was "Jehan de Mandeville", better known as "Sir John Mandeville", ( fl. 1357), English knight born at St. Albans, who complied "The Travels of Sir John Mandeville," a book account of his supposed travels throughout Europe published between 1357 and 1371; William de Mandeville (d. 1189), 3rd Earl...
Another 54 words (4 lines of text) are included under the topic Early Manserval Notables in all our PDF Extended History products and printed products wherever possible.

Migration of the Manserval family to Ireland

Some of the Manserval family moved to Ireland, but this topic is not covered in this excerpt.
Another 41 words (3 lines of text) about their life in Ireland is included in all our PDF Extended History products and printed products wherever possible.

Migration of the Manserval family

The unstable environment in England at this time caused numerous families to board ships and leave in search of opportunity and freedom from persecution abroad in places like Ireland, Australia, and particularly the New World. The voyage was extremely difficult, however, and only taken at great expense. The cramped conditions and unsanitary nature of the vessels caused many to arrive diseased and starving, not to mention destitute from the enormous cost. Still opportunity in the emerging nations of Canada and the United States was far greater than at home and many went on to make important contributions to the cultures of their adopted countries. An examination of many early immigration records reveals that people bearing the name Manserval arrived in North America very early: Gillis Mandeville, who settled in New York in 1659; Miss Mandeville settled in Barbados in 1774; Mary Mandeville settled in Maryland in 1738. In Newfoundland, Canada, Patrick Mandavile from Clonmell, Tipperary, was married in St. John's in 1805.