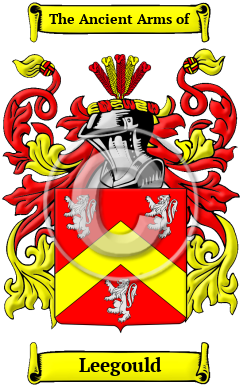 The name Leegould was formed many centuries ago by the ancient Anglo-Saxon tribes of Britain. It was a name typically given to a person who performed good deeds or acts of kindness. [1]

Early Origins of the Leegould family

The surname Leegould was first found in Kent, Sussex and Wiltshire, where the name God was found in the Domesday Book. [4] [5]

Early History of the Leegould family

Before English spelling was standardized a few hundred years ago, spelling variations of names were a common occurrence. Elements of Latin, French and other languages became incorporated into English through the Middle Ages, and name spellings changed even among the literate. The variations of the surname Leegould include Good, Goode, Goad, Goade, Gudd, Gude, Legood and many more.

Notables of this surname at this time include: James Good (c. 1527-1581), a London physician; Thomas Goad (1576-1638), an English clergyman, controversial writer, and rector of Hadleigh, Suffolk; George Goad (died 1671), Master of Eton College; Thomas Good (Goode), (1609-1678), an English academic and clergyman, and Master of Balliol College, Oxford; John Goad (1616-1689)...
Another 53 words (4 lines of text) are included under the topic Early Leegould Notables in all our PDF Extended History products and printed products wherever possible.

Migration of the Leegould family to Ireland

Some of the Leegould family moved to Ireland, but this topic is not covered in this excerpt. More information about their life in Ireland is included in all our PDF Extended History products and printed products wherever possible.

Migration of the Leegould family