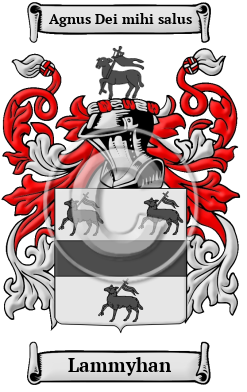 The distinguished surname Lammyhan emerged among the industrious people of Flanders, which was an important trading partner and political ally of Britain during the Middle Ages. As a result of the frequent commercial intercourse between the Flemish and English nations, many Flemish migrants settled in Britain. In early times, people were known by only a single name. However, as the population grew and people traveled further afield, it became increasingly necessary to assume an additional name to differentiate between bearers of the same personal name. One of the most common classes of surname is the patronymic surname, which was usually derived from the first name of the person's father. Flemish surnames of this type are often characterized by the diminutive suffix -kin, which became very frequent in England during the 14th century. The surname Lammyhan is derived from the Old French name Lambert. This is derived from the Old German names Lambert and Lanbert, which literally mean land-bright. The surname Lammyhan is derived from the pet form Lamb, and features the diminutive suffix -in. [1]

Early Origins of the Lammyhan family

The surname Lammyhan was first found in Kent where as a forename, Lambin Frese was listed in the Pipe Rolls in 1181. The Latin form of the name Lambinus was later listed in Kent in 1197 and in the Curia Regis Rolls for Cambridgeshire in 1221. Later again, Robert Lambin was registered in the Subsidy Rolls for London in 1292. John Lanbyn was found in the Feet of Fines for Suffolk in 1302 and in Berkshire in 1305. [3]

Early History of the Lammyhan family

This web page shows only a small excerpt of our Lammyhan research. Another 115 words (8 lines of text) covering the years 1273, 1379, 1683 and 1840 are included under the topic Early Lammyhan History in all our PDF Extended History products and printed products wherever possible.

More information is included under the topic Early Lammyhan Notables in all our PDF Extended History products and printed products wherever possible.

Migration of the Lammyhan family

An examination into the immigration and passenger lists has discovered a number of people bearing the name Lammyhan: W. Lamyn, who sailed to St. Christopher in 1635; Edward Laming to Barbados in 1658; Thomas Lampin to Virginia in 1658; and Francis Lamin to New York in 1823. The family also settled in Pittsburgh, where Michael and Anne Lambing were recorded in the 1890s..