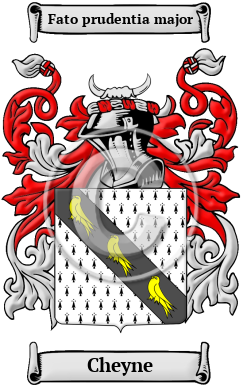 The family name Cheyne is believed to be descended originally from the Norman people. The Normans were commonly believed to be of French origin but were, more accurately, of Viking origin. The Vikings landed in the Orkneys and Northern Scotland about the year 870 AD, under their King, Stirgud the Stout. Later, under their Jarl, Thorfinn Rollo, they invaded France about 911 AD. The French King, Charles the Simple, after Rollo laid siege to Paris, finally conceded defeat and granted northern France to Rollo. Rollo became the first Duke of Normandy. Duke William, who invaded and defeated England in 1066, descended from the first Duke Rollo of Normandy.

Early Origins of the Cheyne family

In Scotland, "the Conqueror's associate to whom this entry refers was Ralph Cheine or de Caineto. He received considerable grants of lands and his descendants were seated, in high repute, at Shetland, in the Isle of Sheppey. One was the famous Sir John Cheney, K.G., created Baron Cheney by Henry VII. for his services at Bosworth: and another, that nobleman's nephew and heir, Sir Thomas Cheney, a person of great gallantry and note in the following reign. At the celebrated interview between Henry VIII. and Francis I., at Ardres, he was one of the challengers against all gentlemen who were to exercise feats of arms on horseback or on foot, for thirty days; and he became subsequently a knight of the garter, warden of the cinque ports, and treasurer of the king's household. " [8]

Early History of the Cheyne family

Notable among the family at this time was Sir John Cheyne (Cheney) (died 1414), a Member of Parliament and briefly the initial Speaker of the House of Commons of England in the Parliament of October 1399, summoned by the newly-acclaimed Henry IV, married Margaret, daughter of William, Lord Deincourt and the widow of Robert, Lord Tiptoft which brought him wealth and status (1372), became an esquire in the king's household and was knighted in 1378, took part in a number of diplomatic missions and became MP for Gloucestershire in 1390, 1393, 1394 and 1399, last occasion he was...
Another 98 words (7 lines of text) are included under the topic Early Cheyne Notables in all our PDF Extended History products and printed products wherever possible.

Migration of the Cheyne family to Ireland

Some of the Cheyne family moved to Ireland, but this topic is not covered in this excerpt.
Another 317 words (23 lines of text) about their life in Ireland is included in all our PDF Extended History products and printed products wherever possible.

Cheyne migration to the United States +

Cheyne Settlers in United States in the 19th Century

Cheyne Settlers in Australia in the 19th Century

Cheyne Settlers in New Zealand in the 19th Century