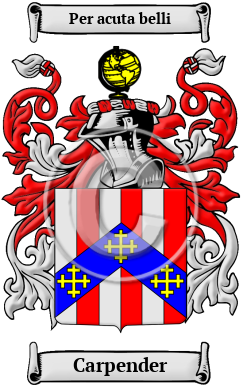 Carpender is an Anglo-Saxon name. The name was originally given to a carpenter derived from the Old French word carpentier. [1]

The name was quite popular in Normandy as seen in the Magni Rotuli Scaccarii Normanniae which listed Robert, Gaufrid, Ansketel, Richard, William, Bernard Carpentarius, of Normandy, 1180-95. This Latin form of the name continued into England where Reiner, Adam, Roger, William Carpentarius, of England were listed in the Pipe Rolls of 1189. In fact the Domesday Book of 1086 included Durand Carpentarius, a tenant in capite, Norfolk, and Rabel and Roger Carpentarius at the same time. The latter gave lands to Stoke-Clare Priory, 1090. William Carpentarius was father of Henry and Manasser Biset, Barons t. Henry II. [2]

Early Origins of the Carpender family

Moving ahead two centuries, researchers found John Carpenter (1370?-1441?), Town Clerk of London, son of Richard Carpenter, a citizen of London. "On 20 April 1417 he was chosen town clerk or common clerk of the city, after having held an inferior post in the town clerk's office for some years previously. " [4]

Early History of the Carpender family

One relatively recent invention that did much to standardize English spelling was the printing press. However, before its invention even the most literate people recorded their names according to sound rather than spelling. The spelling variations under which the name Carpender has appeared include Carpenter, Carpentar, Carpenters, Carpentier and many more.

Distinguished members of the family include Alexander Carpenter, Latinized as Fabricius (fl. 1429), author of the 'Destructorium Vitiorum,' a treatise which enjoyed a considerable popularity in the fifteenth and sixteenth centuries, was six times printed before 1516, and was finally reprinted (at Venice) as late as 1582. [4] John Carpenter (d. 1621), was a divine, born in Cornwall, it is believed at Launceston, and entered as a batler at Exeter College about 1570. [4] Richard Carpenter (1575-1627), was a divine, born in Cornwall in 1575. Nathaniel Carpenter (1589-1628?), was an author and philosopher, son of John Carpenter (d. 1591), rector of Northleigh, Devonshire...
Another 128 words (9 lines of text) are included under the topic Early Carpender Notables in all our PDF Extended History products and printed products wherever possible.

Migration of the Carpender family to Ireland

Some of the Carpender family moved to Ireland, but this topic is not covered in this excerpt. More information about their life in Ireland is included in all our PDF Extended History products and printed products wherever possible.

Carpender migration to the United States +

At this time, the shores of the New World beckoned many English families that felt that the social climate in England was oppressive and lacked opportunity for change. Thousands left England at great expense in ships that were overcrowded and full of disease. A great portion of these settlers never survived the journey and even a greater number arrived sick, starving, and without a penny. The survivors, however, were often greeted with greater opportunity than they could have experienced back home. These English settlers made significant contributions to those colonies that would eventually become the United States and Canada. An examination of early immigration records and passenger ship lists revealed that people bearing the name Carpender arrived in North America very early:

Carpender Settlers in United States in the 17th Century

Motto: Per acuta belli
Motto Translation: Through the asperities of war.