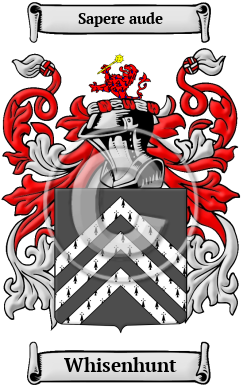 The name Whisenhunt is rooted in the ancient Anglo-Saxon culture. It was a name for someone who was a wise or learned person [1] [2], having derived from the Old English word wis, meaning wise or knowledgeable. [3]

Early Origins of the Whisenhunt family

The surname Whisenhunt was first found in Devon where they held a family seat anciently as Lords of the manor of Greston, at the time of the Conquest in 1066. "The ancient knightly family of Wise of Mount Wise in Stoke Damerel (Devonport) was one of the oldest families in the west of England: one of this family was High Sheriff of Devonshire in 1612." [4]

Another source confirms this history but in more detail. Sir Thomas Wise (c. 1576-1630), "signalized his ownership by building a stately mansion on the craggy headland opposite the domain of the Edgcumbes, and calling it, with that imitation which is the sincerest flattery, ' Mount Wise.' All but the name has long passed into oblivion, and cannon frown and soldiers dwell where the manor-house once stood." [5]

Early History of the Whisenhunt family

Whisenhunt has been spelled many different ways. Before English spelling became standardized over the last few hundred years, spelling variations in names were a common occurrence. As the English language changed in the Middle Ages, absorbing pieces of Latin and French, as well as other languages, the spelling of people's names also changed considerably, even over a single lifetime. Many variations of the name Whisenhunt have been found, including Wise, Wyse and others.

Distinguished members of the family include Michael Wise (1648-1687), an English organist and composer, Organist and Choirmaster at Salisbury Cathedral (1668), Gentleman of the Chapel Royal (1676.) Francis Wise (1695-1767), was an English archaeologist, born in the parish of All Saints, Oxford, son of Francis Wise, mercer, of Oxford. "In December 1719 he was appointed under-keeper of the Bodleian Library, and about this time he collated a manuscript in the Laud collection for the 1729 edition of Plutarch's 'Lives.'...
Another 77 words (6 lines of text) are included under the topic Early Whisenhunt Notables in all our PDF Extended History products and printed products wherever possible.

In the United States, the name Whisenhunt is the 8,979th most popular surname with an estimated 2,487 people with that name. [8]

Migration of the Whisenhunt family to Ireland

Some of the Whisenhunt family moved to Ireland, but this topic is not covered in this excerpt.
Another 63 words (4 lines of text) about their life in Ireland is included in all our PDF Extended History products and printed products wherever possible.

Migration of the Whisenhunt family

In an attempt to escape the chaos experienced in England, many English families boarded overcrowded and diseased ships sailing for the shores of North America and other British colonies. Those families hardy enough, and lucky enough, to make the passage intact were rewarded with land and a social environment less prone to religious and political persecution. Many of these families became important contributors to the young colonies in which they settled. Early immigration and passenger lists have documented some of the first Whisenhunts to arrive on North American shores: Humphrey Wise settled in Massachusetts in 1620; Hanna Wise settled in Virginia in 1655; Christopher Wise settled in Barbados in 1680; Will Wise settled in Georgia in 1755.