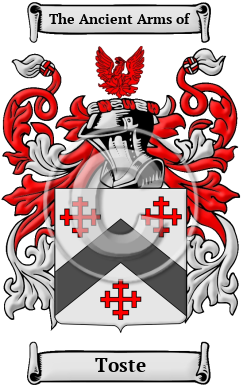 The name Toste is of Anglo-Saxon origin and came from when the family lived in the parish of Toft in the county of Norfolk. This place-name was originally derived from the Old Norman word Topt which was used to denote those who lived in the trees or forest. [1]

Toft is also "a township in the parish of Knutsford, Cheshire and is the parent of the Cheshire Tofts." [2]

The Domesday Book of 1086 has a variety of spellings for the various parishes: Toft, Cambridgeshire, Tofth; Toft Minks, Norfolk, Toft; and West Tofts, Norfolk, Toftes. [3]

"The name of Tofts is now best represented in the district of Bishop's Stortford [Hertfordshire]. Tofts is a Norfolk parish, and De Toftes was a Norfolk surname in the 13th century (H. R.). Two parishes in Cambridgeshire and Lincolnshire are called Toft." [4]

Early Origins of the Toste family

The surname Toste was first found in Northumberland where Elyas del Toft was listed in the Pipe Rolls of 1197. [5] The Hundredorum Rolls of 1273 proved the widespread use of the name at that time: Gundreda de Toftes, Norfolk; Eborard de Toft, Norfolk; Alan de Toft, Cambridgeshire; and Robert de Toft, Bedfordshire. [2]

By the 12th century they had moved north and acquired the old lands and barony which they called Tofts in the parish of Kirkton in Roxburghshire, Scotland. Ingram de Toftes, Robert de Toftes, and William de Toftes all rendered homage in 1296 to King Edward I of England on his brief conquest of Scotland. William of Toftys was Rector of the church at Great Cauerys (Cavers) in 1363. [6]

Early History of the Toste family

It is only in the last few hundred years that the English language has been standardized. For that reason, early Anglo-Saxon surnames like Toste are characterized by many spelling variations. As the English language changed and incorporated elements of other European languages, even literate people changed the spelling of their names. Scribes and monks in the Middle Ages spelled names they sounded, so it is common to find several variations that refer to a single person. The variations of the name Toste include: Taft, Tafte, Toft, Tofte, Tofts, Tuffs and others.

Notables of this surname at this time include: Robert Toft (d. 1620), English poet and translator, a 'gentleman' who travelled in France and Italy. Robert Taft Sr. (c. 1640-1725) was the first US Taft and founder of the US Taft Family. Some sources claim he emigrated to the United States in 1675 arriving at Braintree in Massachusetts and others claim he arrived at Mendon in 1669. The Taft homestead was in Mendon but some of his children were born in Braintree. William Howard...
Another 83 words (6 lines of text) are included under the topic Early Toste Notables in all our PDF Extended History products and printed products wherever possible.

Migration of the Toste family

Many English families tired of political and religious strife left Britain for the new colonies in North America. Although the trip itself offered no relief - conditions on the ships were extremely cramped, and many travelers arrived diseased, starving, and destitute - these immigrants believed the opportunities that awaited them were worth the risks. Once in the colonies, many of the families did indeed prosper and, in turn, made significant contributions to the culture and economies of the growing colonies. An inquiry into the early roots of North American families has revealed a number of immigrants bearing the name Toste or a variant listed above: Joseph Taft arrived in Maryland in 1774; Fred, R. and P. Taft, arrived in San Francisco in 1850; James Toft settled in New England in 1753; David Toft settled in Philadelphia in 1841..