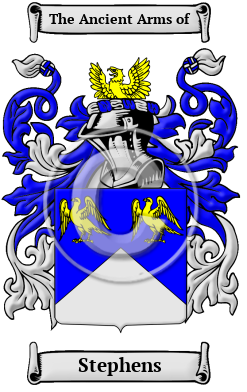 Stephens is one of the names that was brought to England in the wave of migration following the Norman Conquest of 1066. The Stephens family name comes from the ancient personal name Stephen, meaning crown, wreath, or garland.

"This name was introduced into Britain by the Normans, with whom it was a favorite. Although found occasionally in England before 1066 its use then was due really to Christian tradition, Stephen (Stephanos) having been the first Christian martyr after Christ." [1]

"This scripture name, like many others, was not introduced here until the Norman Conquest, after which we find it in the form of Fitz-Stephen. It occupies a large place among our surnames in the usual genitive forms of Stephens. Stevens, Steevens, Stephenson, Stevenson." [2]

Early Origins of the Stephens family

The surname Stephens was first found in Gloucestershire where they were descended from FitzStephen, a Breton knight who was conjecturally descended from Count Stephen of Brittany and accompanied William the Conqueror into England and fought at the Battle of Hastings in 1066. Stephen FitzAirard was the captain of the "Mora," the ship which brought William the Conqueror over from Normandy. His son, Thomas FitzStephen (died 1120) was captain of the ill-fated White Ship (la Blanche-Nef), which sank off Barfleur, Normandy, on 25 November 1120.

William Fitzstephen (fitz Stephen) (died c. 1191) was a cleric and administrator in the service of Thomas Becket.

The name is "mostly confined south of a line drawn west from the Wash, being represented in the counties north of that line by Stephenson and Stevenson. Its great home is in Cornwall, and there are secondary centres in Sussex, and in South Wales and in the adjoining English county of Hereford. The name is said to have been introduced after the Conquest. In Cornwall it is of very ancient date, as is evidenced by the family of Stephens of Tregeuna, who, according to Lower, are the descendants of the Stephyns of St. Ives in the. reign of Edward IV., their name being written then in the singular." [4]

Early History of the Stephens family

Spelling variations in names were a common occurrence in the eras before English spelling was standardized a few hundred years ago. In the Middle Ages, even the literate regularly changed the spellings of their names as the English language incorporated elements of French, Latin, and other European languages. Many variations of the name Stephens have been found, including Stephens, Stevens, Stephen, Steven, Stiven and many more.

Migration of the Stephens family to Ireland

Some of the Stephens family moved to Ireland, but this topic is not covered in this excerpt.
Another 68 words (5 lines of text) about their life in Ireland is included in all our PDF Extended History products and printed products wherever possible.

Stephens migration to the United States +

For many English families, the social climate in England was oppressive and lacked opportunity for change. For such families, the shores of Ireland, Australia, and the New World beckoned. They left their homeland at great expense in ships that were overcrowded and full of disease. Many arrived after the long voyage sick, starving, and without a penny. But even those were greeted with greater opportunity than they could have experienced back home. Numerous English settlers who arrived in the United States and Canada at this time went on to make important contributions to the developing cultures of those countries. Many of those families went on to make significant contributions to the rapidly developing colonies in which they settled. Early North American records indicate many people bearing the name Stephens were among those contributors:

Stephens Settlers in United States in the 17th Century

Stephens Settlers in United States in the 18th Century

Stephens Settlers in United States in the 19th Century

Stephens Settlers in Canada in the 18th Century

Stephens Settlers in Canada in the 19th Century

Stephens Settlers in Canada in the 20th Century

Stephens Settlers in Australia in the 19th Century

Stephens Settlers in New Zealand in the 19th Century

Stephens Settlers in West Indies in the 17th Century

Historic Events for the Stephens family +

Suggested Readings for the name Stephens +