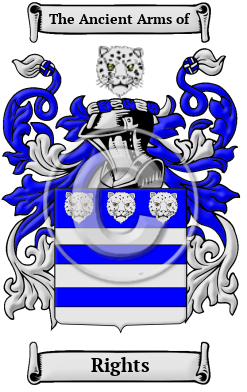 The ancestors of the Rights family derived their name from the "Anglo-Saxon wyrhta [which] signifies, in its widest sense, the same as the Latin faber, a workman of any kind, but more specifically an artificer in hard materials. The eminent antiquary who bears this surname observes, that "Smith was the general term for a worker in metals, and Wright for one who worked in wood and other materials. Hence in the later English period smith became the peculiar name of a blacksmith, and wright of a carpenter, as it is still in Scotland." [1]

Early Origins of the Rights family

"This name is distributed over England, but is comparatively infrequent in the counties on the south coast, and in the northern counties north of Yorkshire. It exists in densest numbers in the counties lying between the Wash and the Thames, being especially numerous in Norfolk, Suffolk, and Essex, and also, but to a less extent, in Cambridgeshire and Hertfordshire. In the midlands it is nearly as crowded, and has its chief centres in Warwickshire, Derbyshire, and Leicestershire, etc. It is also very frequent in Lincolnshire and Cheshire, and is somewhat less numerous in Lancashire and Yorkshire. The Wrights have established themselves in Scotland, though in no great numbers, and not usually north of Perthshire.' [4]

Early History of the Rights family

Spelling variations of this family name include: Wright, Right, Write, Wrighte and others.

Notable amongst the family name during their early history was Laurence Wright (1590-1657), an English physician, notably physician in ordinary to Oliver Cromwell and to the Charterhouse; John Wright (fl. 1602-1658), a major London publisher and bookseller, one of the two booksellers who sold Shakespeare's Sonnets in 1609 a member of the syndicate that printed the Shakespeare First Folio in 1623; Sir Henry Wright, 1st Baronet (c.1637-1664), an English politician who sat in the House of Commons (1660-1664); John...
Another 79 words (6 lines of text) are included under the topic Early Rights Notables in all our PDF Extended History products and printed products wherever possible.

Migration of the Rights family to Ireland

Some of the Rights family moved to Ireland, but this topic is not covered in this excerpt.
Another 132 words (9 lines of text) about their life in Ireland is included in all our PDF Extended History products and printed products wherever possible.

Rights migration to the United States +

Rights Settlers in United States in the 17th Century

Rights Settlers in United States in the 18th Century