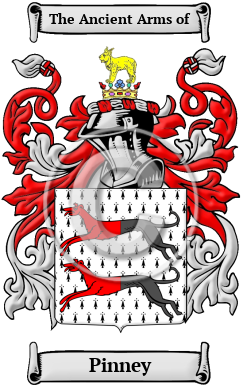 The name Pinney is part of the ancient legacy of the Anglo-Saxon tribes of Britain. Pinney was a name used for a someone as a personal name or literally derived from the coin. It was derived from the Old English "Penig," denoting a coin. The penny was the only unit of coinage in England until the early 14th century, and as such was a coin of considerable value.

While the Saxon heritage is the generally accepted origin of this family, another source points to a possible Norman origin as the Magni Rotuli Scaccarii Normanniae lists Serlo Penné in Normandy in 1180-1195. [1]

Early Origins of the Pinney family

The surname Pinney was first found in Northampton where they held a family seat from very early times, and before the 12th century had become associated with London and had moved north into Scotland.

Some of the first records of the family in Scotland include: Johannes Peny, a witness in Elgin in 1343; Mr. John Peny, a Scottish clerk, having a safe conduct in England in 1362; and a later John Peny who had a grant of the fulling mill of Ballernache in Perthshire in 1375. [2]

Down in Lancashire, an ancient branch of the family was found. "The neat village of Penny-Bridge, so called perhaps from the British word Pen, 'the head,' was the seat of the family of Penny. The chapel, dedicated to the Blessed Virgin Mary, was built and endowed by William Penny, Esq., was consecrated in 1791." [3]

The Hundredorum Rolls of 1273 included various early spellings in many counties: Hurtin Peni in Kent; Alexander Penny in Cambridgeshire; Agatha Peni in Oxfordshire; and Robert Peni in Kent. [4]

"In the reign of Anne, John Penny, Esq., lived at Charlton Musgrove, and at the same time a burgess of Glastonbury bore this name." [6]

Early History of the Pinney family

Until the dictionary, an invention of only the last few hundred years, the English language lacked any comprehensive system of spelling rules. Consequently, spelling variations in names are frequently found in early Anglo-Saxon and later Anglo-Norman documents. One person's name was often spelled several different ways over a lifetime. The recorded variations of Pinney include Penny, Penney, Pennie, Penne and others.

Distinguished members of the family include John Penny (d. 1520), English Bishop of Carlisle. He was educated at Lincoln College, Oxford, and at some unknown time became LL.D. of Cambridge. In 1477 he was a canon at the abbey...
Another 38 words (3 lines of text) are included under the topic Early Pinney Notables in all our PDF Extended History products and printed products wherever possible.

In the United States, the name Pinney is the 10,175th most popular surname with an estimated 2,487 people with that name. [7]

Migration of the Pinney family to Ireland

Some of the Pinney family moved to Ireland, but this topic is not covered in this excerpt.
Another 70 words (5 lines of text) about their life in Ireland is included in all our PDF Extended History products and printed products wherever possible.

Pinney migration to the United States +

Thousands of English families boarded ships sailing to the New World in the hope of escaping the unrest found in England at this time. Although the search for opportunity and freedom from persecution abroad took the lives of many because of the cramped conditions and unsanitary nature of the vessels, the opportunity perceived in the growing colonies of North America beckoned. Many of the settlers who survived the journey went on to make important contributions to the transplanted cultures of their adopted countries. The Pinney were among these contributors, for they have been located in early North American records:

Pinney Settlers in United States in the 17th Century

Pinney Settlers in United States in the 18th Century

Pinney Settlers in Australia in the 19th Century