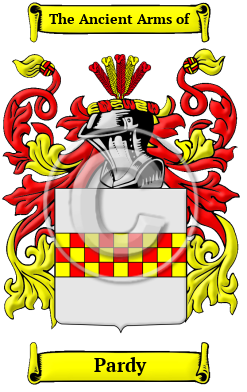 The ancient Anglo-Saxon culture of England produced the name of Pardy. It was given to a person who was known for their continued use of the oath pour Dieu, which is Old French meaning "for God." This is a subset of the nickname type of name known as oath names. [1]

Early Origins of the Pardy family

The surname Pardy was first found in Bedfordshire where Gilbert Purdeu was listed in the Assize Rolls for 1227. Later, the Hundredorum Rolls of 1279 included an entry for John Purde in Cheshire and the Subsidy Rolls for Sussex had two entries for the family: John Purdew in 1296; and John Purde in 1332. These entries may be the same person, or father and son. In Norfolk, John Purdy was listed there in 1436 as was Robert Purdu in 1479. [1]

Further to the north in Scotland, "John Purdie was one of an inquest in 1296 which found that Robert de Pinkeny held the tenement of Balincref, and David Perdy was a tenant of the earl of Douglas in Linton, 1376. A later David Purde, succentor of Glasgow, 1476-1477, appears again in 1491 as Prade, and in the title of his obituary in 1497 his name is given as Prowde." [2]

Early History of the Pardy family

One relatively recent invention that did much to standardize English spelling was the printing press. However, before its invention even the most literate people recorded their names according to sound rather than spelling. The spelling variations under which the name Pardy has appeared include Pardy, Pardie, Pardee, Purdie, Purdew, Purdy, Purdoe, Pardoe and many more.

Notables of the family at this time include Thomas Pardoe (1770-1823), English enameler who was noted for flower painting from Derby. Alexander Purdie (c. 1743- 1779), born in Scotland, emigrated to America by 1764. He became a prominent colonial American printer, publisher, and merchant in Williamsburg, Virginia where he...
Another 48 words (3 lines of text) are included under the topic Early Pardy Notables in all our PDF Extended History products and printed products wherever possible.

In Newfoundland, Canada, the name Pardy is the 67th most popular surname with an estimated 397 people with that name. [3]

Migration of the Pardy family to Ireland

Some of the Pardy family moved to Ireland, but this topic is not covered in this excerpt.
Another 57 words (4 lines of text) about their life in Ireland is included in all our PDF Extended History products and printed products wherever possible.

Pardy migration to the United States +

At this time, the shores of the New World beckoned many English families that felt that the social climate in England was oppressive and lacked opportunity for change. Thousands left England at great expense in ships that were overcrowded and full of disease. A great portion of these settlers never survived the journey and even a greater number arrived sick, starving, and without a penny. The survivors, however, were often greeted with greater opportunity than they could have experienced back home. These English settlers made significant contributions to those colonies that would eventually become the United States and Canada. An examination of early immigration records and passenger ship lists revealed that people bearing the name Pardy arrived in North America very early:

Pardy Settlers in United States in the 17th Century

Pardy Settlers in United States in the 19th Century

Pardy Settlers in United States in the 20th Century

Pardy Settlers in Canada in the 18th Century

Pardy Settlers in Canada in the 19th Century

Pardy Settlers in Canada in the 20th Century

Pardy Settlers in New Zealand in the 19th Century

Pardy Settlers in West Indies in the 17th Century