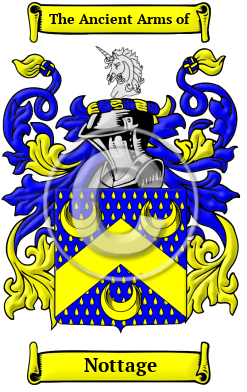 The origins of the Nottage name lie with England's ancient Anglo-Saxon culture. It comes from when the family lived at the knot, the summit of a rocky hill, from the residence near that place.

Early Origins of the Nottage family

The surname Nottage was first found in Derbyshire where traditionally the name was descended from the Scandinavian King Canute, or Cnut.

Drayton sings "The Knot that called was Canutus, bird of old, of that great King of Danes, his name that still doth hold, his appetite to please that far and near was sought, for his, as some have said, from Denmark hither brought."

Cnut or Canute the Great (994?-1035), and by Scandinavian writers the Mighty and the Old, was king of the English, Danes, and Norwegians, and was the younger son of Sweyn, king of Denmark. [1]

The Hundredorum Rolls of 1273 had two listings for the family: Richard Knotte, London; and Peter Cnotte, Salop (Shropshire) while the Yorkshire Poll Tax Rolls of 1379 had the following: Robertus Knotte; Ricardus Notte; Isabella Notte; and Thomas Knot. [3]

Up north in Scotland, "A ship of Knut the wealthy, citizen of Berwick, was carried off by Erlind, earl of Orkney, in 1156 (Orkneyinga Saga, Edinburgh, 1873, p. 161.) Hugo Cnot granted an annual-rent of two shillings to the Priory of Inchcolm, c. 1210-1229. The name also occurs in records of Coldingham Priory as Cnoyt. Richard Knut witnessed resignation of the lands of Langholm and Brakanwra, 1281. Adum Knout and John Knout were burgesses of Roxburgh, 1296, and rendered homage [to King Edward I of England] in that year. " [4]

Early History of the Nottage family

Before the last few hundred years, the English language had no fast system of spelling rules. For that reason, spelling variations are commonly found in early Anglo-Saxon surnames. Over the years, many variations of the name Nottage were recorded, including Cnot, Cnotte, Canute, Cnut, Knot, Knout, Knotte, Knott and many more.

Distinguished members of the family include William Knott of Great Gonerby, Lincolnshire. Edward Knott (1582-1656), born with the name of Matthew Wilson, was an English Jesuit controversialist, twice provincial of the Society of Jesus in England. He was born at Catchburn, a township in the parish of Morpeth, Northumberland. During 1626 he was a missioner in the Suffolk district. He was apprehended in 1629, and was committed to the Clink prison in Southwark, but at the instance of the queen he...
Another 81 words (6 lines of text) are included under the topic Early Nottage Notables in all our PDF Extended History products and printed products wherever possible.

Migration of the Nottage family to Ireland

Some of the Nottage family moved to Ireland, but this topic is not covered in this excerpt.
Another 148 words (11 lines of text) about their life in Ireland is included in all our PDF Extended History products and printed products wherever possible.

Nottage migration to the United States +

To escape oppression and starvation at that time, many English families left for the "open frontiers" of the New World with all its perceived opportunities. In droves people migrated to the many British colonies, those in North America in particular, paying high rates for passages in cramped, unsafe ships. Although many of the settlers did not make the long passage alive, those who did see the shores of North America perceived great opportunities before them. Many of the families that came from England went on to make essential contributions to the emerging nations of Canada and the United States. Research into various historical records revealed some of first members of the Nottage family emigrate to North America:

Nottage Settlers in United States in the 20th Century

Nottage Settlers in Canada in the 18th Century

Nottage Settlers in Australia in the 19th Century