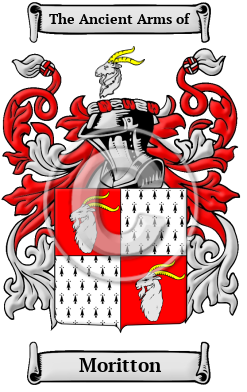 The surname Moritton is a habitation name; derived from one of several places so named in England and Scotland. The place name was made up of the Old English elements "morr," meaning "marsh, or moor," and "tun," meaning en enclosure or settlement.

Early Origins of the Moritton family

The surname Moritton was first found in Wiltshire, where a Robert de Mortone was recorded in the Pipe Rolls for that county in 1130. As this name was formed from several different place names, entirely different lines of the Moritton surname arose throughout Britain. Other early records of the name include: William de Morton, on record in 1218 in the Feet of Fines for Oxford; and Thomas Morton, on record in the Feet of Fines for Surrey in 1432-33. [1]

Early History of the Moritton family

Notables of this surname at this time include: John Morton (c.1420-1500), English prelate, statesman, and Archbishop of Canterbury (1486-1500); and Sir George Morton, 1st Baronet (died 1662), an English landowner and politician who sat in the House of Commons in 1626, supporter of the Royalist cause during the English Civil War; and his son, Sir John Morton, 2nd Baronet (ca. 1627-1699), an English landowner and politician, Member of Parliament for Poole in 1661; Thomas Morton (1564-1659), an English churchman, bishop of several dioceses and favored by King James...
Another 88 words (6 lines of text) are included under the topic Early Moritton Notables in all our PDF Extended History products and printed products wherever possible.

Migration of the Moritton family to Ireland

Some of the Moritton family moved to Ireland, but this topic is not covered in this excerpt. More information about their life in Ireland is included in all our PDF Extended History products and printed products wherever possible.

Migration of the Moritton family