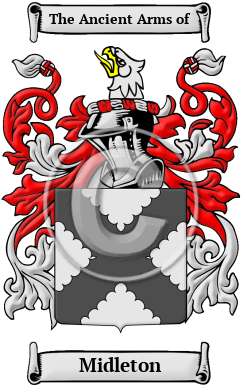 The ancestors of the bearers of the Midleton family name are thought have lived in ancient Anglo-Saxon England. They were first found in one of the many places called Middleton throughout England. "There are several dozen places, larger or smaller, scattered up and down England of this name." [1] The surname Midleton belongs to the large category of Anglo-Saxon habitation names, which are derived from pre-existing names for towns, villages, parishes, or farmsteads.

Early Origins of the Midleton family

The surname Midleton was first found in one of the many villages named Middleton throughout Britain. One of the earlies records of the name was Robert de Mideltone who was listed in 1166 in Eynsham, Oxfordshire. [2] The Hundredorum Rolls of 1273 list: Richard de Middleton in Buckinghamshire; Thomas de Middelton in Lincolnshire; and Gilbert de Middleton in Yorkshire. The Yorkshire Poll Tax Rolls revealed: Johannes de Midillton; Thomas de Midilton; and Ricardus de Midilton. [1] The Subsidy Rolls of Sussex list William de Midelton in 1327 and The Feet of Fines of Warwickshire list John Middilton (1409-1410.) [2] Middleton, Warwickshire is a parish in the union of Tamworth. "the Moxhall estate, is the property of Lord Middleton. Middleton Hall, a seat of Lord Middleton's, is an ancient moated mansion, finely situated, and surrounded by an extensive park. " [3] The name was quick to appear further north in Scotland where "the first of the name recorded appears to have been Umfridus de Midilton who witnessed a grant of the lands of Petmengartenach to the Abbey of Arbroath in 1221. " [4] A few years later, Humfrey de Middiltone of the county of Kincardyn rendered homage to King Edward I in 1296. Robert Middleton was a defender of Dunbar Castle against the English in 1296, he was taken prisoner by King Edward I of England. "For about three centuries the family here bore the designation of Middleton of that Ilk." [4]

Early History of the Midleton family

Until quite recently, the English language has lacked a definite system of spelling rules. Consequently, Anglo-Saxon surnames are characterized by a multitude of spelling variations. Changes in Anglo-Saxon names were influenced by the evolution of the English language, as it incorporated elements of French, Latin, and other languages. Although Medieval scribes and church officials recorded names as they sounded, so it is common to find one person referred to by several different spellings of his surname, even the most literate people varied the spelling of their own names. Variations of the name Midleton include Middleton, Middelton, Midleton and others.

Midleton migration to the United States +

Searching for a better life, many English families migrated to British colonies. Unfortunately, the majority of them traveled under extremely harsh conditions: overcrowding on the ships caused the majority of the immigrants to arrive diseased, famished, and destitute from the long journey across the ocean. For those families that arrived safely, modest prosperity was attainable, and many went on to make invaluable contributions to the development of the cultures of the new colonies. Research into the origins of individual families in North America revealed records of the immigration of a number of people bearing the name Midleton or a variant listed above:

Midleton Settlers in United States in the 17th Century

Midleton Settlers in United States in the 19th Century