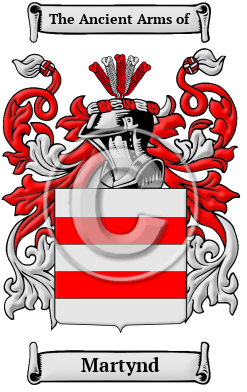 The ancestors of the Martynd family first reached the shores of England in the wave of migration after the Norman Conquest of 1066. Their name is derived from the Latin name Martinus, which is a derivative of Mars, who was the Roman god of fertility and war. The popularity of the name Martin is due to Saint Martin de Tours, who was one of the best known saints in the Western World. With the spread of Christianity, people named their children after saints in the hope that the children might enjoy that saint's patronage. Martin is also one of the few saints' names, other than the names of Old English saints, found in England before the Norman Conquest. [1]

Early Origins of the Martynd family

The surname Martynd was first found in Pembrokeshire. "Martin, Sire of Tour, four miles from Bayeux, came over with William of Normandy in 1066; and conquered the territory of Kemeys in Pembrokeshire. It was erected into a Paltime Barony, which he governed as Lord Marcher, having his castle at Newport, where its ruins still exist. " [2]

Early History of the Martynd family

Norman surnames are characterized by a multitude of spelling variations. The frequent changes in surnames are largely due to the fact that the Old and Middle English languages lacked definite spelling rules. The introduction of Norman French to England, as well as the official court languages of Latin and French, also had pronounced influences on the spelling of surnames. Since medieval scribes and church officials recorded names as they sounded, rather than adhering to any specific spelling rules, it was common to find the same individual referred to with different spellings. The name has been spelled Martin, Matin, Mattin, Martyn and others.

Outstanding amongst the family at this time was Sir William Martyn of Athelhampton (c. 1446-1503), Sheriff of London in 1484 and Lord Mayor of London in 1492; Sir Richard Martin, Lord Mayor of London in 1594; Robert Martin, Esquire, who was made the Sheriff of the County of Radnour in 1648; Sir Thomas Martin Knight and Baronet, High Sheriff of Cambridgeshire and Huntingtonshire in 1643; Christopher Martin (ca. 1582-1620), from Essex, was a Pilgrim and signer of the Mayflower Compact; Christopher Martyn (c. 1617-1678), an English politician who sat in the House...
Another 91 words (6 lines of text) are included under the topic Early Martynd Notables in all our PDF Extended History products and printed products wherever possible.

Migration of the Martynd family to Ireland

Some of the Martynd family moved to Ireland, but this topic is not covered in this excerpt.
Another 81 words (6 lines of text) about their life in Ireland is included in all our PDF Extended History products and printed products wherever possible.

Migration of the Martynd family

Many English families emigrated to North American colonies in order to escape the political chaos in Britain at this time. Unfortunately, many English families made the trip to the New World under extremely harsh conditions. Overcrowding on the ships caused the majority of the immigrants to arrive diseased, famished, and destitute from the long journey across the stormy Atlantic. Despite these hardships, many of the families prospered and went on to make invaluable contributions to the development of the cultures of the United States and Canada. Early North American immigration records have revealed a number of people bearing the name Martynd or a variant listed above: John Martin, who came to Virginia in 1606; Christopher Martin and his wife, who arrived in America on the Mayflower in 1620; Joe Martin, who settled in Providence, Rhode Island in 1635.