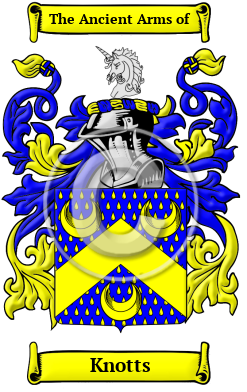 Knotts is a name whose history is connected to the ancient Anglo-Saxon tribes of Britain. The name is derived from when the Knotts family once lived at the knot, the summit of a rocky hill, from the residence near that place.

Early Origins of the Knotts family

The surname Knotts was first found in Derbyshire where traditionally the name was descended from the Scandinavian King Canute, or Cnut.

Drayton sings "The Knot that called was Canutus, bird of old, of that great King of Danes, his name that still doth hold, his appetite to please that far and near was sought, for his, as some have said, from Denmark hither brought."

Cnut or Canute the Great (994?-1035), and by Scandinavian writers the Mighty and the Old, was king of the English, Danes, and Norwegians, and was the younger son of Sweyn, king of Denmark. [1]

The Hundredorum Rolls of 1273 had two listings for the family: Richard Knotte, London; and Peter Cnotte, Salop (Shropshire) while the Yorkshire Poll Tax Rolls of 1379 had the following: Robertus Knotte; Ricardus Notte; Isabella Notte; and Thomas Knot. [3]

Up north in Scotland, "A ship of Knut the wealthy, citizen of Berwick, was carried off by Erlind, earl of Orkney, in 1156 (Orkneyinga Saga, Edinburgh, 1873, p. 161.) Hugo Cnot granted an annual-rent of two shillings to the Priory of Inchcolm, c. 1210-1229. The name also occurs in records of Coldingham Priory as Cnoyt. Richard Knut witnessed resignation of the lands of Langholm and Brakanwra, 1281. Adum Knout and John Knout were burgesses of Roxburgh, 1296, and rendered homage [to King Edward I of England] in that year. " [4]

Early History of the Knotts family

Sound was what guided spelling in the essentially pre-literate Middle Ages, so one person's name was often recorded under several variations during a single lifetime. Also, before the advent of the printing press and the first dictionaries, the English language was not standardized. Therefore, spelling variations were common, even among the names of the most literate people. Known variations of the Knotts family name include Cnot, Cnotte, Canute, Cnut, Knot, Knout, Knotte, Knott and many more.

Distinguished members of the family include William Knott of Great Gonerby, Lincolnshire. Edward Knott (1582-1656), born with the name of Matthew Wilson, was an English Jesuit controversialist, twice provincial of the Society of Jesus in England. He was born at Catchburn, a township in the parish of Morpeth, Northumberland. During 1626 he was a missioner in the Suffolk district. He was apprehended in 1629, and was committed to the Clink prison in Southwark, but at the instance of the queen he...
Another 81 words (6 lines of text) are included under the topic Early Knotts Notables in all our PDF Extended History products and printed products wherever possible.

In the United States, the name Knotts is the 4,722nd most popular surname with an estimated 7,461 people with that name. [5]

Migration of the Knotts family to Ireland

Some of the Knotts family moved to Ireland, but this topic is not covered in this excerpt.
Another 148 words (11 lines of text) about their life in Ireland is included in all our PDF Extended History products and printed products wherever possible.

Knotts migration to the United States +

For political, religious, and economic reasons, thousands of English families boarded ships for Ireland, Canada, the America colonies, and many of smaller tropical colonies in the hope of finding better lives abroad. Although the passage on the cramped, dank ships caused many to arrive in the New World diseased and starving, those families that survived the trip often went on to make valuable contributions to those new societies to which they arrived. Early immigrants bearing the Knotts surname or a spelling variation of the name include:

Knotts Settlers in United States in the 17th Century

Knotts Settlers in United States in the 19th Century

Suggested Readings for the name Knotts +