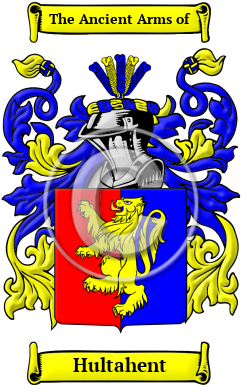 The name Hultahent first arose amongst the Anglo-Saxon tribes of Britain. It is derived from their having lived in Halton, a very common place-name in England. The place-name is derived from the Old English terms halh, which means nook or corner of land, and tun, which meant farm or enclosure, and later came to mean fortress and town. The name means "farm in the nook or corner of land." The surname denotes a dweller at same. [1]

Early Origins of the Hultahent family

The surname Hultahent was first found in Halton, the original name of the parish of St. Dominick, Cornwall. "At the time of Doomsday Survey the district was taxed under the appellation of Halton, by which name a manor is still distinguished in this parish. Halton, which gave name originally to this parish, before St. Dominick either honoured or disgraced it with his name, is a manor, that so early as the thirteenth century belonged to an ancient family of this name. In the reign of Edward II. the male heirs becoming extinct, Halton was carried by an heiress to Wendyn, from which family it was carried by another heiress to Whitlegh, who was sheriff of Devon in the reign of Richard II. and whose grandson was sheriff of that county under Henry VII." [3]

Early History of the Hultahent family

This web page shows only a small excerpt of our Hultahent research. Another 70 words (5 lines of text) covering the years 1084, 1628, 1699, 1632, 1704 and 1677 are included under the topic Early Hultahent History in all our PDF Extended History products and printed products wherever possible.

One relatively recent invention that did much to standardize English spelling was the printing press. However, before its invention even the most literate people recorded their names according to sound rather than spelling. The spelling variations under which the name Hultahent has appeared include Halton, Haltone, Hultahan, Haltom, Haltum and others.

Another 43 words (3 lines of text) are included under the topic Early Hultahent Notables in all our PDF Extended History products and printed products wherever possible.

Migration of the Hultahent family to Ireland

Some of the Hultahent family moved to Ireland, but this topic is not covered in this excerpt. More information about their life in Ireland is included in all our PDF Extended History products and printed products wherever possible.

Migration of the Hultahent family

At this time, the shores of the New World beckoned many English families that felt that the social climate in England was oppressive and lacked opportunity for change. Thousands left England at great expense in ships that were overcrowded and full of disease. A great portion of these settlers never survived the journey and even a greater number arrived sick, starving, and without a penny. The survivors, however, were often greeted with greater opportunity than they could have experienced back home. These English settlers made significant contributions to those colonies that would eventually become the United States and Canada. An examination of early immigration records and passenger ship lists revealed that people bearing the name Hultahent arrived in North America very early: James Haltone who arrived in Philadelphia in 1853; James Halton arrived in Maryland in 1775; John Halton arrived in Potomack in 1747.