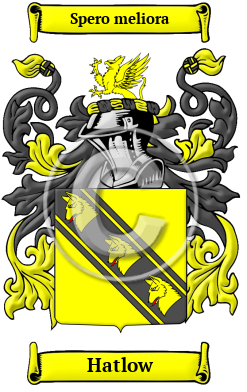 The name Hatlow was brought to England in the great wave of migration following the Norman Conquest of 1066. The Hatlow family lived in Worcestershire. The earliest instances of the name in England appear for the most part to be of local origin; that is, derived from the name of the place where an original bearer lived or where he once held land, the place in this instance being a hlaw, the Old English word for a hill. Any individual case may also be of nickname origin, deriving from loup, the Old French word for a wolf, or from one of the pet-names for Lawrence, such as Law or Low. [1]

Early Origins of the Hatlow family

The surname Hatlow was first found in Worcestershire. Later, a branch of the family was found at Alderwasley in Derbyshire. " The Le Foune or Fawne family held lands here in the reign of Henry III., and their heiress intermarried with the Lowes, who obtained a grant of the manor from Henry VIII." [3]

Early History of the Hatlow family

Norman surnames are characterized by a multitude of spelling variations. The frequent changes in surnames are largely due to the fact that the Old and Middle English languages lacked definite spelling rules. The introduction of Norman French to England, as well as the official court languages of Latin and French, also had pronounced influences on the spelling of surnames. Since medieval scribes and church officials recorded names as they sounded, rather than adhering to any specific spelling rules, it was common to find the same individual referred to with different spellings. The name has been spelled Lowe, Lowes, Lowis, Lowse, Low, McLoy and others.

Outstanding amongst the family at this time was Humphrey Lowe, High Sheriff of Shropshire; George Lowe (c. 1594-1682), an English politician, Member of Parliament for Calne (1640-1644), a Royalist supporter; John Lowe (1628-1667), an English politician who sat in the House of Commons from 1661 to 1667; and Captain Edward "Ned" Low, also Lowe or Loe, (c. 1690-c. 1724), a notorious English pirate active in the Caribbean and the Bay of Hounduras during the early 1720s. John Lowe (d. 1467), bishop successively of St. Asaph and Rochester, is said to have been a native of Worcestershire. Nash ( Worcestershire, ii. 95) connects him...
Another 224 words (16 lines of text) are included under the topic Early Hatlow Notables in all our PDF Extended History products and printed products wherever possible.

Migration of the Hatlow family to Ireland

Some of the Hatlow family moved to Ireland, but this topic is not covered in this excerpt.
Another 87 words (6 lines of text) about their life in Ireland is included in all our PDF Extended History products and printed products wherever possible.

Migration of the Hatlow family

Many English families emigrated to North American colonies in order to escape the political chaos in Britain at this time. Unfortunately, many English families made the trip to the New World under extremely harsh conditions. Overcrowding on the ships caused the majority of the immigrants to arrive diseased, famished, and destitute from the long journey across the stormy Atlantic. Despite these hardships, many of the families prospered and went on to make invaluable contributions to the development of the cultures of the United States and Canada. Early North American immigration records have revealed a number of people bearing the name Hatlow or a variant listed above: John Low settled in Barbados in 1663; Joseph Low settled in Delaware in 1682; Leonard Low settled with his wife Anna and three children in Carolina in 1754.