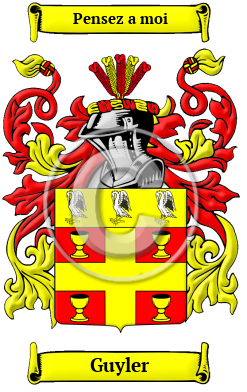 The name Guyler came to England with the ancestors of the Guyler family in the Norman Conquest of 1066. It comes from the medieval given name Giles. This name is derived from the Greek aigidion, which means kid, or young goat.

Another source claims the family were originally Norman from "La Gile or Gueilles, Normandy as the Magni Rotuli Scaccarii Normanniae lists Robert de Gueilles of Normandy 1198. [1]

Early Origins of the Guyler family

The surname Guyler was first found in the Domesday Book of 1086 where Gilo and Ghilo were both listed. [2] Shortly after Widofilius Gisel was listed in Lincolnshire as was Gisle, Egidius, Gilo, Gile in 1183-1187.

About this time, the first records of the name as a surname appeared: Ailward, Godfrey Gile in the Pipe Rolls for Berkshire and Northumberland 1176, 1191; William Gyles in the Subsidy Rolls for Sussex in 1296; William Gilis in the Assize Rolls for Kent in 1317; and Nicholas Gisel in Suffolk in 1346. [3]

"The Domesday Book Gilo has been identified with Old German Gilo, equivalent to Gislebertus, and this is supported by the forms Gisel, Gisle. The Latinization of this by Egidius shows that the scribe associated the name with Giles, a difficult name, regularly translated Egidius, from Greek ayíiov 'kid'. The name of the 7th-century Provengal hermit St Ægidius spread widely and survives as Gidi, Gidy in southern France, as Gili, Gilli in the Alpes-Maritimes, elsewhere as Gile, Gille. The popularity of this form in England is proved both by the number of churches dedicated to St Giles and by the frequent medieval Egidius." [3]

Further to the north in Scotland, the first record was of William Gilis who gave his land of Mosplat to the church of Lanark c. 1214. But we must wait over three hundred years to find the next references: Robert Geliss was chaplain in 1527, and Jhone Gelis was one of an inquest on lands of Gowane (Govan) in the same year. [5]

"Dean Prior, [Devon] was purchased at the Dissolution from Henry VIII. by William Giles of Bowden, near Totnes, and in the mansion which the Gileses built there long resided Sir Edward Giles, born at Totnes about 1580, one of Prince's ' Worthies,' and a prominent Devonian throughout a long career. A soldier in the Low Countries, under Elizabeth ; a courtier, knighted by James I. at his coronation ; constantly chosen one of the representatives of Totnes during the reigns of James and Charles he proved himself not only a statesman, but a patriot, by remonstrating against ship-money in 1634. The epitaph on Sir Edward Giles and his wife, placed beneath their handsome monument in Dean Prior Church, was written by Robert Herrick, who was for many years Vicar of Dean." [6]

Early History of the Guyler family

Anglo-Norman names tend to be marked by an enormous number of spelling variations. This is largely due to the fact that Old and Middle English lacked any spelling rules when Norman French was introduced in the 11th century. The languages of the English courts at that time were French and Latin. These various languages mixed quite freely in the evolving social milieu. The final element of this mix is that medieval scribes spelled words according to their sounds rather than any definite rules, so a name was often spelled in as many different ways as the number of documents it appeared in. The name was spelled Giles, Gyles, Jiles and others.

Outstanding amongst the family at this time was John Gyles (ca.1680-1755), American interpreter and soldier, best known for his account of his experiences with the Malecite tribes. Mascal Gyles (died 1652), was an English vicar of Ditchling, Sussex, from 1621 to 1644; and Henry Gyles or Giles (1640?-1709), was an English...
Another 50 words (4 lines of text) are included under the topic Early Guyler Notables in all our PDF Extended History products and printed products wherever possible.

Migration of the Guyler family to Ireland

Some of the Guyler family moved to Ireland, but this topic is not covered in this excerpt.
Another 47 words (3 lines of text) about their life in Ireland is included in all our PDF Extended History products and printed products wherever possible.

Migration of the Guyler family

Because of the political and religious discontent in England, families began to migrate abroad in enormous numbers. Faced with persecution and starvation at home, the open frontiers and generally less oppressive social environment of the New World seemed tantalizing indeed to many English people. The trip was difficult, and not all made it unscathed, but many of those who did get to Canada and the United States made important contributions to the young nations in which they settled. Some of the first North American settlers with Guyler name or one of its variants: Edward Giles who settled in Salem, Massachusetts in 1634; George Giles who purchased land in Virginia in 1652; Susan Giles, who settled in Barbados in 1660.

Motto: Pensez a moi
Motto Translation: Think of me.