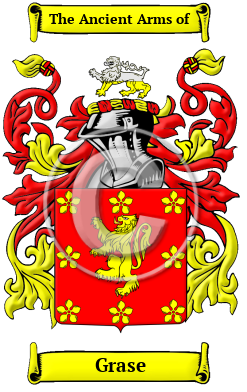 Early Origins of the Grase family

The surname Grase was first found in Buckinghamshire where they were descended from a Norman knight from Le Gras in Normandy, who arrived in England with the Norman Conquest in 1066 A.D. [1]

Early records show William le Gras in the Pipe Rolls of Gloucestershire in 1199, and in the Assize Rolls for Lincolnshire of 1219. Roger le Gas was on record in the Curia Regis Rolls for Staffordshire of 1200. William atte Grase was listed in the Subsidy Rolls of Somerset of 1327. [2]

Early History of the Grase family

This web page shows only a small excerpt of our Grase research. Another 76 words (5 lines of text) covering the years 1548, 1574, 1744, 1690 and 1172 are included under the topic Early Grase History in all our PDF Extended History products and printed products wherever possible.

Spelling variations of this family name include: Grace, Grase, Gras, Grass, Grasse and others.

More information is included under the topic Early Grase Notables in all our PDF Extended History products and printed products wherever possible.

Migration of the Grase family to Ireland

Some of the Grase family moved to Ireland, but this topic is not covered in this excerpt.
Another 69 words (5 lines of text) about their life in Ireland is included in all our PDF Extended History products and printed products wherever possible.

Grase migration to the United States +

Grase Settlers in United States in the 19th Century