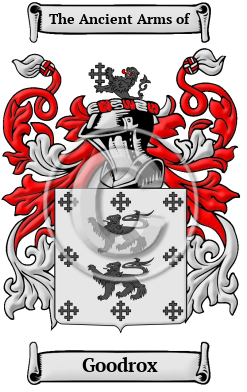 Goodrox is a name of ancient Anglo-Saxon origin and comes from the family once having lived in the region of Goodrich or Gotheridge in the county of Hereford. The surname Goodrox may also derive from the patronymic name the son of Godrich which was composed of the elements God which referred to someone good and Ric which meant power. The surname may also have derived from the Old English cud, meaning "famous," with the aforementioned "ric." [1]

Early Origins of the Goodrox family

The surname Goodrox was first found in various locations throughout ancient Britain. The Hundredorum Rolls of 1273 list: Walter Goderiche in Bedfordshire; William Godriche in Oxfordshire; Stephen Godrich in Suffolk; and Ambrosius filius Godrige in Cambridgeshire. [4]

Early History of the Goodrox family

Sound was what guided spelling in the essentially pre-literate Middle Ages, so one person's name was often recorded under several variations during a single lifetime. Also, before the advent of the printing press and the first dictionaries, the English language was not standardized. Therefore, spelling variations were common, even among the names of the most literate people. Known variations of the Goodrox family name include Goodrich, Gooderidge, Goodrick, Goodricke, Goodridge, Goderich, Godriche, Godric, Godrige, Goderidge, Goodreed, Goodreid, Gutteridge, Guteridge, Guttridge, Gutridge and many more.

Notables of the family at this time include Sir Henry Goodrich of Ribstone Hall, Envoy Extraordinary to the King of Spain in 1682; Francis Goodricke (1621-1673), an English lawyer and politician who sat in the House of Commons between 1659 and 1673; and Rev. Charles Goodrich, the rector of Bittering Parva, county Norfolk. Sir Henry Goodricke (1642-1705), was an English diplomatist, eldest son of Sir John Goodricke (created Baronet by...
Another 69 words (5 lines of text) are included under the topic Early Goodrox Notables in all our PDF Extended History products and printed products wherever possible.

Migration of the Goodrox family

For political, religious, and economic reasons, thousands of English families boarded ships for Ireland, Canada, the America colonies, and many of smaller tropical colonies in the hope of finding better lives abroad. Although the passage on the cramped, dank ships caused many to arrive in the New World diseased and starving, those families that survived the trip often went on to make valuable contributions to those new societies to which they arrived. Early immigrants bearing the Goodrox surname or a spelling variation of the name include: John Goodrich, who settled in New England in 1630; Thomas Goodrich, who settled in Virginia in 1653; Joe Goodridge, who settled in Virginia in 1635; Henry Gutteridge, who settled in Maryland in 1673.