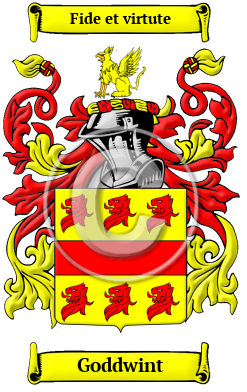 The generations and branches of the Goddwint family share a name that has its roots in the ancient Anglo-Saxon culture of Britain. The name Goddwint comes from the baptismal name for the son of Godwin.

Early Origins of the Goddwint family

The surname Goddwint was first found in Yorkshire where they held a family seat from very early times. Godwin or Godwine (d. 1053) was the Earl of Wessex, chief adviser to King Canute, who held great wealth and lands in those times. His son Harold Godwinson (circa 1022-1066) was Harold II of England, the last Anglo-Saxon King of England, killed on October 14 1066 at the Battle of Hastings. Godwin, or Godwine was also the name of an 11th century Bishop of Lichfield, who died in 1020. [1]

Early History of the Goddwint family

Until quite recently, the English language has lacked a definite system of spelling rules. Consequently, Anglo-Saxon surnames are characterized by a multitude of spelling variations. Changes in Anglo-Saxon names were influenced by the evolution of the English language, as it incorporated elements of French, Latin, and other languages. Although Medieval scribes and church officials recorded names as they sounded, so it is common to find one person referred to by several different spellings of his surname, even the most literate people varied the spelling of their own names. Variations of the name Goddwint include Godwin, Goodwin, Goodin, Gooding, Goodings, Goodwyn, Godwyn, Godwine, Goodwine, Goddwin, Goddwyn, Goddywne and many more.

Distinguished members of the family include Thomas Godwin (1517-1590), Bishop of Bath and Wells, born in 1517 at Oakingham, Berkshire, of poor parents; Francis Godwin (1562-1633), English divine, Bishop of Llandaff and of Hereford; John Goodwin (1594-1665), an English preacher, theologian and prolific author; John Goodwin (1603-1674), an English lawyer and politician who sat in the House of Commons between 1641 and 1660, supporter of the Parliamentary cause in the English Civil War; Peter Gooden (died 1695), an English Roman Catholic priest; Thomas Godwin (died 1677), a Virginia politician and landowner, served in the House of Burgesses 1654-1655...
Another 98 words (7 lines of text) are included under the topic Early Goddwint Notables in all our PDF Extended History products and printed products wherever possible.

Migration of the Goddwint family to Ireland

Some of the Goddwint family moved to Ireland, but this topic is not covered in this excerpt.
Another 84 words (6 lines of text) about their life in Ireland is included in all our PDF Extended History products and printed products wherever possible.

Migration of the Goddwint family

Searching for a better life, many English families migrated to British colonies. Unfortunately, the majority of them traveled under extremely harsh conditions: overcrowding on the ships caused the majority of the immigrants to arrive diseased, famished, and destitute from the long journey across the ocean. For those families that arrived safely, modest prosperity was attainable, and many went on to make invaluable contributions to the development of the cultures of the new colonies. Research into the origins of individual families in North America revealed records of the immigration of a number of people bearing the name Goddwint or a variant listed above: Reinould Godwin, who arrived in Virginia in 1620; Mrs. Goodwin settled in Boston Massachusetts in 1632; Daniel Godwin, who came to Virginia in 1635; Deveraux Godwin, who arrived in Maryland in 1638.