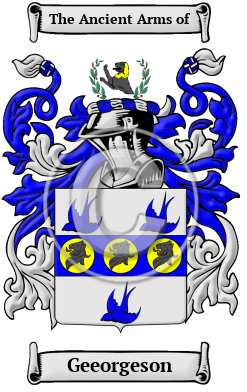 Geeorgeson is a name of Anglo-Saxon origin and came from the given name of the father and was typically denoted as "the son of George." The personal name George was originally derived from the Greek word which means someone who was a farmer or someone who worked the land. [1]

Early Origins of the Geeorgeson family

The surname Geeorgeson was first found in Dorset where it is noted as a somewhat rare name in mediaeval records. The popularity of the name increased during the Crusades which brought more contact with the Orthodox Church. St. George, who slew his famous dragon in 303 A.D., may have inspired the use of this name.

Early History of the Geeorgeson family

Spelling variations in names were a common occurrence before English spelling was standardized a few hundred years ago. In the Middle Ages, even the literate spelled their names differently as the English language incorporated elements of French, Latin, and other European languages. Many variations of the name Geeorgeson have been found, including George, Gorge, Gorges, Georgeson and others.

Distinguished members of the family include John George (1594-1677), an English lawyer and politician who sat in the House of Commons at various times between 1626 and 1678. Sir Ferdinando Gorges (1566?-1647), was an "English naval and military commander, Governor of Plymouth, the 'Father of English Colonisation in America,' of a family said to have been settled in Somersetshire from the time of Henry I, and holding estates in the parish of Wraxall from the time of Edward II, was the younger son of Edward Gorges of Wraxall." [9] Sir Arthur Gorges (d. 1625), was an...
Another 93 words (7 lines of text) are included under the topic Early Geeorgeson Notables in all our PDF Extended History products and printed products wherever possible.

Migration of the Geeorgeson family to Ireland

Some of the Geeorgeson family moved to Ireland, but this topic is not covered in this excerpt.
Another 71 words (5 lines of text) about their life in Ireland is included in all our PDF Extended History products and printed products wherever possible.

Migration of the Geeorgeson family

Families began migrating abroad in enormous numbers because of the political and religious discontent in England. Often faced with persecution and starvation in England, the possibilities of the New World attracted many English people. Although the ocean trips took many lives, those who did get to North America were instrumental in building the necessary groundwork for what would become for new powerful nations. Among the first immigrants of the name Geeorgeson, or a variant listed above to cross the Atlantic and come to North America were : Jane George, who settled in Virginia in 1635; Henry George, who arrived in Virginia in 1635; Peter George, who arrived in Braintree, MA in 1642; Robert George, who settled in Virginia in 1642.