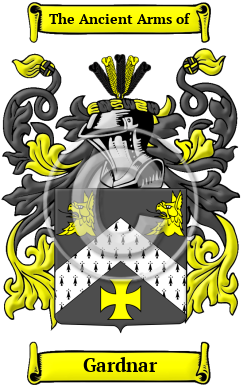 The origins of the Gardnar surname lie with the Anglo-Saxon tribes of Britain. The name Gardnar began when someone in that family worked as a gardener. The surname Gardnar originally derived from the Old French word gardinier. [1]

It was later adopted in England after the Norman Conquest of 1066. Occupational names that were derived from the common trades of the medieval era transcended European cultural and linguistic boundaries. Occupational names have remained fairly common in the modern period. This is attested to by the continuing appearance of occupational suffixes at the end of many English surnames. Some of these suffixes include: herd, monger, maker, hewer, smith, and wright. Similarly, surnames of office, which include military, judicial, papal and other positions of authority, are widespread throughout Europe. Those who were involved in the military, or feudal armies, were given names such as the English surname Archer, the French name Chevalier and the German name Jeger, which means hunter. Names that were derived from judicial and papal titles, such asBailiffe, Squire and Abbott, are still commonly seen with the same surname spelling today.

Early Origins of the Gardnar family

The name is "most characteristic of the midland counties, and of the eastern counties south of the Wash. Singularly rare in the south - west, and in the north of England, excepting Lancashire. At present best represented in Essex, Lancashire, and Warwickshire." [3]

The Yorkshire Poll Tax Rolls of 1379 had only two entries:Thomas Gardiner; and Thomas Garchiner as holding lands there at that time.

In Scotland, the name was rendered in Latin charters as ortolanus and under that spelling the first Scottish record was found: Rogerus Ortolanus, who was juror on an inquest in 1296. "In 1329 there is record of meal delivered to Nicholas Gerdener who is again referred to as Nicholas ortolanus. Gilbert ortolanus is also referred to in the same source. Robert Gardnar was a notary public in the diocese of Dunblane in 1426." [5]

Early History of the Gardnar family

One relatively recent invention that did much to standardize English spelling was the printing press. However, before its invention even the most literate people recorded their names according to sound rather than spelling. The spelling variations under which the name Gardnar has appeared include Gardiner, Gardner and others.

Outstanding amongst the family at this time was Stephen Gardiner (c.1493-1555), English prelate, who was made Bishop of Winchester (1531); Richard Gardyner, Lord Mayor of London in 1478; Thomas Gardiner (1591-1662), an English lawyer and politician who sat in the House of Commons in 1640, supporter of the Royalist cause in the English Civil War; Thomas Gardner (c. 1592-1674), English settler to Massachusetts, Overseer of...
Another 64 words (5 lines of text) are included under the topic Early Gardnar Notables in all our PDF Extended History products and printed products wherever possible.

Migration of the Gardnar family to Ireland

Some of the Gardnar family moved to Ireland, but this topic is not covered in this excerpt.
Another 100 words (7 lines of text) about their life in Ireland is included in all our PDF Extended History products and printed products wherever possible.

Migration of the Gardnar family

At this time, the shores of the New World beckoned many English families that felt that the social climate in England was oppressive and lacked opportunity for change. Thousands left England at great expense in ships that were overcrowded and full of disease. A great portion of these settlers never survived the journey and even a greater number arrived sick, starving, and without a penny. The survivors, however, were often greeted with greater opportunity than they could have experienced back home. These English settlers made significant contributions to those colonies that would eventually become the United States and Canada. An examination of early immigration records and passenger ship lists revealed that people bearing the name Gardnar arrived in North America very early: Lyon Gardiner who settled in Saybrook, Long Island, after sailing in his 25 ton ketch called "Bachelor" in 1633. He purchased the island from the Indians, and this famous island was first known as Gardiner's Island. His daughter, Mary, was the first white person born on Long Island. Christopher Gardiner, came to New England in 1630.