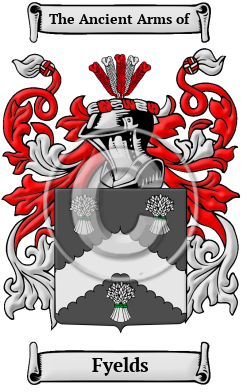 The Anglo-Saxon name Fyelds comes from when the family resided in the area that was near a field. This surname is a topographic name and is derived from the Old English word feld, which literally means the pasture or open country. [1]

In this case, the bearer of the surname Fyelds lived in an area of land that was cleared of forest.

Early Origins of the Fyelds family

The surname Fyelds was first found in many shires and counties throughout Britain. Some of the earliest records show: Thomas atte Felde in the Writs of Parliament of 1301; William de la Felde in Gloucestershire during reign of King Edward I; and John de la Felde in Herefordshire at about the same time. The Hundredorum Rolls of 1273 list Linot ate [atte] Feld and William a la Feld in Oxfordshire. [3]

Early History of the Fyelds family

The English language only became standardized in the last few centuries; therefore, spelling variations are common among early Anglo-Saxon names. As the form of the English language changed, even the spelling of literate people's names evolved. Fyelds has been recorded under many different variations, including Field, Feild, Felde and others.

Distinguished members of the family include Roger Felde ( fl. 1407), of Hereford, an English politician, Member of the Parliament for Hereford in 1407; Sir James Field of West Harrow; and Edmund Feilde (Field) (1620-1676), an English barrister and politician, son of Thomas Feilde, rector of St Andrew's, Hertford. John Field or Feild (1520-1587), 'Proto-Copernican' of England, son of Richard Field (d. 1542), was born, as is supposed, at Ardsley, in the West Riding of Yorkshire, between 1520 and 1530. "He lived in London at the date of his first ‘Ephemeris,’ and appears, from a remark in a manuscript in the Lambeth Library...
Another 290 words (21 lines of text) are included under the topic Early Fyelds Notables in all our PDF Extended History products and printed products wherever possible.

Migration of the Fyelds family to Ireland

Some of the Fyelds family moved to Ireland, but this topic is not covered in this excerpt.
Another 145 words (10 lines of text) about their life in Ireland is included in all our PDF Extended History products and printed products wherever possible.

Migration of the Fyelds family

For many English families, the political and religious disarray that shrouded England made the far away New World an attractive prospect. On cramped disease-ridden ships, thousands migrated to those British colonies that would eventually become Canada and the United States. Those hardy settlers that survived the journey often went on to make important contributions to the emerging nations in which they landed. Analysis of immigration records indicates that some of the first North American immigrants bore the name Fyelds or a variant listed above: Zacharia Field from Hadleigh in Suffolk settled in Hartford Connecticut in 1639; Robert Field of Yorkshire settled in Flushing, Long Island in 1645; Daniel Field settled in Virginia in 1637.