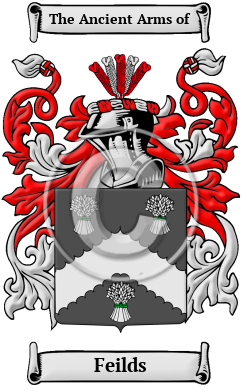 The name Feilds is part of the ancient legacy of the Anglo-Saxon tribes of Britain. It is a product of when the family lived in the area that was near a field. This surname is a topographic name and is derived from the Old English word feld, which literally means the pasture or open country. [1]

In this case, the bearer of the surname Feilds lived in an area of land that was cleared of forest.

Early Origins of the Feilds family

The surname Feilds was first found in many shires and counties throughout Britain. Some of the earliest records show: Thomas atte Felde in the Writs of Parliament of 1301; William de la Felde in Gloucestershire during reign of King Edward I; and John de la Felde in Herefordshire at about the same time. The Hundredorum Rolls of 1273 list Linot ate [atte] Feld and William a la Feld in Oxfordshire. [3]

Early History of the Feilds family

The first dictionaries that appeared in the last few hundred years did much to standardize the English language. Before that time, spelling variations in names were a common occurrence. The language was changing, incorporating pieces of other languages, and the spelling of names changed with it. Feilds has been spelled many different ways, including Field, Feild, Felde and others.

Distinguished members of the family include Roger Felde ( fl. 1407), of Hereford, an English politician, Member of the Parliament for Hereford in 1407; Sir James Field of West Harrow; and Edmund Feilde (Field) (1620-1676), an English barrister and politician, son of Thomas Feilde, rector of St Andrew's, Hertford. John Field or Feild (1520-1587), 'Proto-Copernican' of England, son of Richard Field (d. 1542), was born, as is supposed, at Ardsley, in the West Riding of Yorkshire, between 1520 and 1530. "He lived in London at the date of his first ‘Ephemeris,’ and appears, from a remark in a manuscript in the Lambeth Library...
Another 290 words (21 lines of text) are included under the topic Early Feilds Notables in all our PDF Extended History products and printed products wherever possible.

Migration of the Feilds family to Ireland

Some of the Feilds family moved to Ireland, but this topic is not covered in this excerpt.
Another 145 words (10 lines of text) about their life in Ireland is included in all our PDF Extended History products and printed products wherever possible.

Migration of the Feilds family

Thousands of English families in this era began to emigrate the New World in search of land and freedom from religious and political persecution. Although the passage was expensive and the ships were dark, crowded, and unsafe, those who made the voyage safely were rewarded with opportunities unavailable to them in their homeland. Research into passenger and immigration lists has revealed some of the very first Feildss to arrive in North America: Zacharia Field from Hadleigh in Suffolk settled in Hartford Connecticut in 1639; Robert Field of Yorkshire settled in Flushing, Long Island in 1645; Daniel Field settled in Virginia in 1637.