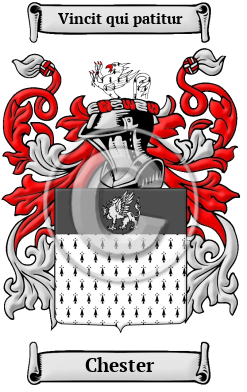 In ancient Anglo-Saxon England, the ancestors of the Chester surname lived in Chester, which is the capital city of the county of Cheshire, which lies on the border between England and Wales; it is the northernmost county on the border. Devastated in the 11th century by border wars between William the Conqueror and the Welsh, Cheshire's border with Wales fluctuated over the next several centuries. Today, the western portion of the Domesday era county is in Wales.

"Many places where Roman and other military stations (castra) existed are called chesters, and residence at such a spot may have conferred the surname. " [1]

Early Origins of the Chester family

"From the city of Chester, the capital of Cheshire, England, founded by the Romans. The name is derived from the Latin Castrum; Saxon, ceaster, a fortified place, a city, a castle or camp, it being a Roman station where the twentieth legion was quartered. " [3]

Robert Chester ( fl. 1182), was an early English astronomer and alchemist who took his name from the place of his birth. "Trained in the ordinary learning of his time, he turned aside from it to pursue mathematical studies, in which he gained a high reputation." [4]

Roger of Chester (fl. 1339), is "almost beyond doubt the same person with Ranulf Higden, the chronicler, like whom he is described as a monk of St. Werburg's at Chester." [4]

The Pipe Rolls of Lincolnshire listed Richard de Cestre there in 1200 and John, William de Chester was listed in the Subsidy Rolls of Warwickshire in 1332. A few years later, John Chestre was listed in the Feet of Fines for 1366-1367. [5]

The Yorkshire Poll Tax Rolls of 1379 listed Elisabet de Chester and Cristiana de Chester as holding lands there at that time. [7]

Chesterman is a nickname as "the one who hailed from Chester. This surname is well known in the States. Adam Chesterman 'imbarqued in the Mathew of London' for St. Christophers, 1635. He was nineteen years old. Probably the present Chestermans are his descendants." [7]

Early History of the Chester family

It is only in the last few hundred years that the English language has been standardized. For that reason, early Anglo-Saxon surnames like Chester are characterized by many spelling variations. As the English language changed and incorporated elements of other European languages, even literate people changed the spelling of their names. The variations of the name Chester include: Chester, Chestere, Chesters, Cheaster, Chister, Chestare and many more.

Distinguished members of the family include Sir William Chester (1509?-1595?), Lord Mayor and merchant of London, second son of John Chester, citizen and draper of London. "His father died in 1513, and two years afterwards his mother took for her third husband Sir John Milborne, who was lord mayor in 1521, and under whose care young Chester was brought up. Lady Milborne survived to 1545, outliving her husband, who died in...
Another 71 words (5 lines of text) are included under the topic Early Chester Notables in all our PDF Extended History products and printed products wherever possible.

Chester migration to the United States +

Many English families tired of political and religious strife left Britain for the new colonies in North America. Although the trip itself offered no relief - conditions on the ships were extremely cramped, and many travelers arrived diseased, starving, and destitute - these immigrants believed the opportunities that awaited them were worth the risks. Once in the colonies, many of the families did indeed prosper and, in turn, made significant contributions to the culture and economies of the growing colonies. An inquiry into the early roots of North American families has revealed a number of immigrants bearing the name Chester or a variant listed above:

Chester Settlers in United States in the 17th Century

Chester Settlers in United States in the 18th Century

Chester Settlers in United States in the 19th Century

Chester Settlers in Canada in the 18th Century

Chester Settlers in Australia in the 19th Century

Chester Settlers in New Zealand in the 19th Century

Historic Events for the Chester family +