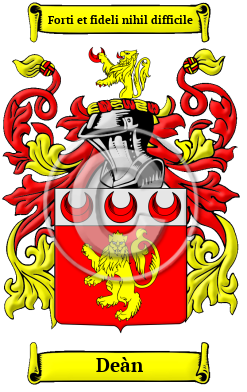 The ancestors of the bearers of the Deàn family name are thought have lived in ancient Anglo-Saxon England. They were first found in an area where there was a valley. The place-name is derived from the Old English word denu, when translated means valley. This Old English word has also given rise to other local names such as West Dean in Sussex, Deane in Hampshire and Dean in Essex. [1]

Early Origins of the Deàn family

The surname Deàn was first found in Sussex where the first record was of Ralph Dene holding manor and estates in that shire. [5]

Early History of the Deàn family

Until quite recently, the English language has lacked a definite system of spelling rules. Consequently, Anglo-Saxon surnames are characterized by a multitude of spelling variations. Changes in Anglo-Saxon names were influenced by the evolution of the English language, as it incorporated elements of French, Latin, and other languages. Although Medieval scribes and church officials recorded names as they sounded, so it is common to find one person referred to by several different spellings of his surname, even the most literate people varied the spelling of their own names. Variations of the name Deàn include Dean, Deane, Dene, Deans, Deanes, Denes, Adeane and others.

Distinguished members of the family include Henry Deane (c.1440-1503), Lord Chancellor of Ireland from 1491 to 1496, Archbishop of Canterbury from 1501 to 1503 and Lord Keeper of the Great Seal from 1500 to 1502; Richard Deane (1610-1653), a British naval general and major general for Cromwell; Sir Anthony Deane (1638-1721), English politician, naval architect, Master Shipwright and commercial shipbuilder, Mayor of Harwich, Essex in 1676; and Deane, made Baron Muskerry of Ireland by Queen Anne in 1708. William Deane (d. 1588), was an English Catholic divine, educated in the English college at Rheims, and after...
Another 95 words (7 lines of text) are included under the topic Early Deàn Notables in all our PDF Extended History products and printed products wherever possible.

Migration of the Deàn family to Ireland

Some of the Deàn family moved to Ireland, but this topic is not covered in this excerpt.
Another 86 words (6 lines of text) about their life in Ireland is included in all our PDF Extended History products and printed products wherever possible.

Deàn migration to the United States +

Searching for a better life, many English families migrated to British colonies. Unfortunately, the majority of them traveled under extremely harsh conditions: overcrowding on the ships caused the majority of the immigrants to arrive diseased, famished, and destitute from the long journey across the ocean. For those families that arrived safely, modest prosperity was attainable, and many went on to make invaluable contributions to the development of the cultures of the new colonies. Research into the origins of individual families in North America revealed records of the immigration of a number of people bearing the name Deàn or a variant listed above:

Deàn Settlers in United States in the 17th Century

Deàn Settlers in United States in the 18th Century

Deàn Settlers in United States in the 19th Century

Deàn Settlers in United States in the 20th Century

Deàn Settlers in Canada in the 18th Century

Deàn Settlers in Canada in the 19th Century

Deàn Settlers in Australia in the 19th Century

Deàn Settlers in New Zealand in the 19th Century

The British first settled the British West Indies around 1604. They made many attempts but failed in some to establish settlements on the Islands including Saint Lucia and Grenada. By 1627 they had managed to establish settlements on St. Kitts (St. Christopher) and Barbados, but by 1641 the Spanish had moved in and destroyed some of these including those at Providence Island. The British continued to expand the settlements including setting the First Federation in the British West Indies by 1674; some of the islands include Barbados, Bermuda, Cayman Island, Turks and Caicos, Jamaica and Belize then known as British Honduras. By the 1960's many of the islands became independent after the West Indies Federation which existed from 1958 to 1962 failed due to internal political conflicts. After this a number of Eastern Caribbean islands formed a free association. [25]

Deàn Settlers in West Indies in the 17th Century

Historic Events for the Deàn family +

Suggested Readings for the name Deàn +