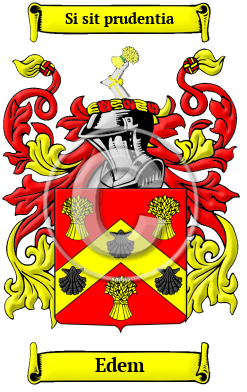 The name Edem is of Anglo-Saxon origin and came from when the family lived in the region of Eden in Durham. "Though the pedigree is not traced higher than the year 1413, there is no reason to doubt that the name is local and derived from either Castle Eden or Little Eden in the county of Durham, where, as Mr. Courthope asserts, the family were resident for several generations prior to the close of the XIV. century." [1]

The source Norman People, pushes back earlier: "William de Torp or Torpes and his fief in Normandy are mentioned 1180 (Magni Rotuli Scaccarii Normanniae), he granted part of his lordship of Eden, Durham, to the Church of Durham before 1180. His descendant, Eustace de Eden, granted part of Eden to the same church 1318. Eustace and Utred de Edene were witnesses to the charter of William de Torp of Eden, being probably his younger brothers. The family appears to have always remained seated in Durham." [2]

Early Origins of the Edem family

The surname Edem was first found in Suffolk. Hellaby Hall in Stainton, in the West Riding of Yorkshire was an ancient mansion on the property of Sir R. J. Eden, but is now a farmhouse. [3]

Some of the family have recently branched to Windleston in Durham. "It comprises by computation 1250 acres, and has been long the property of the Eden family, of whom Sir Robert Johnson Eden, Bart., rebuilt Windleston Hall about twenty years since [(1860s.)] " [3]

West Auckland in Durham also had some early records of the family. "The place gives the title of Baron to the family of Eden, who formerly resided here: the estates now belong to Sir R. J. Eden, Bart." [3]

Let's take a moment to turn back the pages of time for this family and explore some of the early rolls. In Oxfordshire, we found Tomas filius Edon listed in the Pipe Rolls of 1203; Edon le Poleter in the Feet of Fines for Suffolk in 1270; Roger Edun in the Subsidy Rolls for Cambridgeshire in 1327; and Stephen Edoun in the Subsidy Rolls for Suffolk in 1327. In Northumberland, Nicholas de Edune was listed in the Pipe Rolls of 1178 and William de Eden was listed in the Assize Rolls for 1256. [4]

Early History of the Edem family

It is only in the last few hundred years that the English language has been standardized. For that reason, early Anglo-Saxon surnames like Edem are characterized by many spelling variations. As the English language changed and incorporated elements of other European languages, even literate people changed the spelling of their names. Scribes and monks in the Middle Ages spelled names they sounded, so it is common to find several variations that refer to a single person. The variations of the name Edem include: Eden, Edin, Edden, Edens and others.

Distinguished members of the family include Richard Eden (1521?-1576), English translator, born in Herefordshire about 1521, and studied at Queens' College, Cambridge, 1535-1544, under Sir Thomas Smith; he held...
Another 28 words (2 lines of text) are included under the topic Early Edem Notables in all our PDF Extended History products and printed products wherever possible.

Migration of the Edem family to Ireland

Some of the Edem family moved to Ireland, but this topic is not covered in this excerpt. More information about their life in Ireland is included in all our PDF Extended History products and printed products wherever possible.

Migration of the Edem family

Many English families tired of political and religious strife left Britain for the new colonies in North America. Although the trip itself offered no relief - conditions on the ships were extremely cramped, and many travelers arrived diseased, starving, and destitute - these immigrants believed the opportunities that awaited them were worth the risks. Once in the colonies, many of the families did indeed prosper and, in turn, made significant contributions to the culture and economies of the growing colonies. An inquiry into the early roots of North American families has revealed a number of immigrants bearing the name Edem or a variant listed above: the senior branch of the Edens who migrated to Maryland in the Colonies. They were from the West Auckland branch in Durham. The same branch produced the Lords Auckland in Ireland who were the 37th ranking nobles of Ireland. Individuals who arrived in North America included Alice Eden, who came to Boston in 1637.