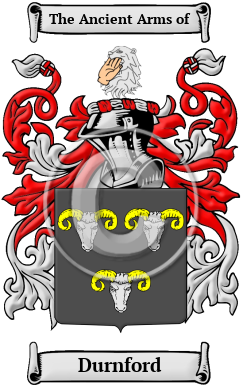 The name Durnford is part of the ancient legacy of the Anglo Saxon tribes of Britain. The first people to bear this distinguished name lived in the civil parish of Great and Little Durnford on the river Avon in Wiltshire. [1] The name Durnford derives from the Anglo-Saxon words "dierne ford" for "hidden ford" meaning the hidden crossing over the nearby river Avon. [2]

Early Origins of the Durnford family

The surname Durnford was first found in Wiltshire where Roger de Derneford (b. 1135) held the fifth part of a knight's fee in 1165. His father was born in 1090 in that area but his grandfather was born in 1040 in Normandy. [3] Roger de Derneford was listed in the Pipe Rolls of 1190. This "Roger" may be the same as the aforementioned. A few years later, William de Durneford was listed in the Hundredorum Rolls in 1255. [4]

To the south in Devon, the manor of East Stonehouse (commonly called Stonehouse now) was passed from the Stonehouse family to the Durnfords through marriage, "whose heiress in turn carried it to its present possessors, the Edgcumbes. Apart from the building whose solid character gave the manor its name, there is little evidence, until stonehouse came into the hands of the Durnfords, that it consisted of more than the castellated mansion of its lords, with some buildings of a monastic character, doubtfully connected with the great Priory of Plympton. The Durnfords, however, did their best to foster their infant town ; and James Durnford, as noted, brought down upon him the Abbot of Buckland, as lord of the hundred of Roborough, by setting up a pillory and tumbrel at ' Estonhouse ' and holding courts there, wherefore, 26th Henry VI., it was ordered that the pillory and tumbrel should be ' deposed, destroyed, and removed,' that no courts should be held by Durnford which interfered with the abbot's view of frank-pledge, and no hindrance put to the execution of the abbot's precepts or the action of his bailiffs, etc., in the manor. Stonehouse was little more than a fishing village from

the time of the Durnfords until the reign of Henry VIII. , when it grew more rapidly. " [6]

Early History of the Durnford family

Spelling variations of this family name include: Durnford, Darnford, Dornford and others.

Notables of this surname at this time include: Major General Elias Walker Durnford R.E (1774-1850) English military officer. Durnford was born in 1774 in Lowestoft, Suffolk. He was commissioned as a Second Lieutenant in the Corps of Royal Engineers on 24 April 1793. Although he was born in Suffolk, on the North Sea coast, Elias Walker Durnford spent his first years in Pensacola (Fla), where his father was commanding engineer and then lieutenant governor of the British colony of West Florida. When he was about four, he went back to England without his parents, who entrusted him to the care of...
Another 123 words (9 lines of text) are included under the topic Early Durnford Notables in all our PDF Extended History products and printed products wherever possible.

Durnford migration to the United States +

Durnford Settlers in United States in the 19th Century

Durnford Settlers in Australia in the 19th Century