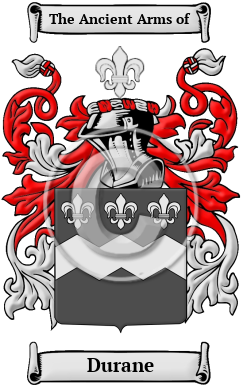 The distinguished surname Durane was first brought to England in the wake of the Norman Conquest of 1066. The name is patronymic in origin, signifying "the son of Durant," an Old French personal name. Looking at records from this time, we found Geoffry, Roger and Henry Durant who claimed descent from Normandy c. 1180-95 while another census in 1198, lists Aceline, Ralph, Richard, and Robert Durant.

Early Origins of the Durane family

The surname Durane was first found in Warwickshire, Worcestershire, and Shropshire at Tong, a parish, in the union of Shiffnall, Shiffnall division of the hundred of Brimstree. "Tong Castle, the seat of the family of Durant, a magnificent mansion remodelled in the last century, is crowned with numerous turrets, pinnacles, and eight lofty domes, producing a striking effect: it contains many valuable pictures and cabinets." [1]

Another branch of the family were found at Wallingswells in the West Riding of Yorkshire. "In excavating near the house [of Sir Thomas Woolaston White], in 1829, several stone coffins were found, and amongst them that of Dame Margery Dourant, second abbess of the convent, who died in the reign of Richard I ([1189-1199)]." [1]

And yet another branch of the family was found in Cornwall. "The manor of Lanestock, which is partly in the parish [of St. Austell], and partly in Tywardreath, has of late years passed under the same title as Trenance Austell. This was anciently in the family of Durant, from whom it passed into that of the Arundells of Trerice in Newlyn. The manor of Thorlebear [in the parish of Launcells, Cornwall] was formerly the property of the Durants, by whose heiress it was carried in marriage to the Arundells of Trerice." [2]

Early History of the Durane family

This web page shows only a small excerpt of our Durane research. Another 111 words (8 lines of text) covering the years 1140, 1296, 1578, 1564, 1660 and 1644 are included under the topic Early Durane History in all our PDF Extended History products and printed products wherever possible.

Spelling variations in names were a common occurrence in the eras before English spelling was standardized a few hundred years ago. In the Middle Ages, even the literate regularly changed the spellings of their names as the English language incorporated elements of French, Latin, and other European languages. Many variations of the name Durane have been found, including Durand, Durant, Durande, Durrane, Dant, Dante and many more.

Outstanding amongst the family at this time was Thomas Drant (d. 1578?), English divine and poet, born at Hagworthingham in Lincolnshire, son of Thomas Drant. "On the occasion of Queen Elizabeth's visit to the university in August 1564 he composed copies of English, Latin, and Greek verses, which he presented to her majesty. " [3] John Durnat...
Another 55 words (4 lines of text) are included under the topic Early Durane Notables in all our PDF Extended History products and printed products wherever possible.

Migration of the Durane family

For many English families, the social climate in England was oppressive and lacked opportunity for change. For such families, the shores of Ireland, Australia, and the New World beckoned. They left their homeland at great expense in ships that were overcrowded and full of disease. Many arrived after the long voyage sick, starving, and without a penny. But even those were greeted with greater opportunity than they could have experienced back home. Numerous English settlers who arrived in the United States and Canada at this time went on to make important contributions to the developing cultures of those countries. Many of those families went on to make significant contributions to the rapidly developing colonies in which they settled. Early North American records indicate many people bearing the name Durane were among those contributors: William Durand, who settled in Virginia in 1635; George Durant, who came to North Carolina in 1661; Thomas Dant, who immigrated to Maryland in 1674; Thomas Durrant, who arrived with his wife and servants in Barbados in 1680.