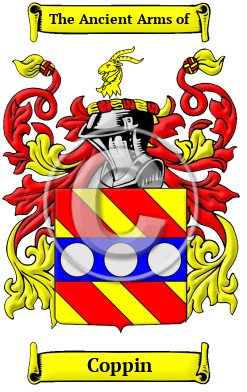 Coppin is one of the names that was brought to England in the wave of migration following the Norman Conquest of 1066. The Coppin family lived in Suffolk which is derived from the Old English copp, a word for the top or summit of a hill, and indicates someone who lived in such a place. Another reference presumes that the name was derived from the word "coppin," which was a "piece of yarn taken from a spindle." [1] The Suffolk expression "To live like a Coppinger, points to the wealth and hospitality of a family of this name who flourished in the 16th and 17th century at Buxhall." [1]

Early Origins of the Coppin family

Early History of the Coppin family

Before the advent of the printing press and the first dictionaries, the English language was not standardized. Sound was what guided spelling in the Middle Ages, so one person's name was often recorded under several variations during a single lifetime. Spelling variations were common, even among the names of the most literate people. Known variations of the Coppin family name include Coppinger, Coppenger, Copenger, Copinger, Coppynger, Copinsher and many more.

Notables of this surname at this time include: William Copinger (d. 1436), who became the parson (rector) of Buxhall in 1416. He was a member of a family settled at Buxhall, Suffolk. His will is dated 20 Jan. 1411-1412, and was proved on 2 March 1415-1416. He was buried at Buxhall. [3] Sir Ralph Copinger, of Suffolk, was knighted on the battlefield at on Muckleburgh, in 1547, fighting against the Scots. John Coppin or Copping (d. 1583), was a Brownist, who lived in Bury St. Edmunds. He enthusiastically accepted the teachings of Robert Browne; preached Browne's doctrines in his native town...
Another 195 words (14 lines of text) are included under the topic Early Coppin Notables in all our PDF Extended History products and printed products wherever possible.

Migration of the Coppin family to Ireland

Some of the Coppin family moved to Ireland, but this topic is not covered in this excerpt.
Another 65 words (5 lines of text) about their life in Ireland is included in all our PDF Extended History products and printed products wherever possible.

Coppin migration to the United States +

To escape the political and religious chaos of this era, thousands of English families began to migrate to the New World in search of land and freedom from religious and political persecution. The passage was expensive and the ships were dark, crowded, and unsafe; however, those who made the voyage safely were encountered opportunities that were not available to them in their homeland. Many of the families that reached the New World at this time went on to make important contributions to the emerging nations of the United States and Canada. Research into various historical records has revealed some of first members of the Coppin family to immigrate North America:

Coppin Settlers in United States in the 19th Century

Coppin Settlers in Australia in the 19th Century

Coppin Settlers in New Zealand in the 19th Century

Coppin Settlers in West Indies in the 17th Century

Historic Events for the Coppin family +