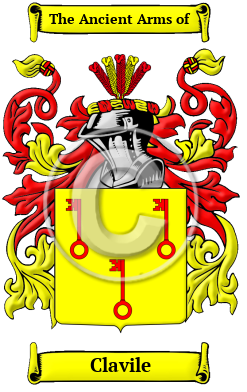 Early Origins of the Clavile family

The surname Clavile was first found in Dorset where Walter de Clavile was listed as a tenant in chief in Dorset and Devon in the Domesday Book. [2] "His male descendants continued to possess lands in the former county till 1774." [3]

Early History of the Clavile family

Distinguished members of the family include Robert Clavell (1632-1711), a London bookseller, born at Steeple, Dorset. He also authored treatises. He died at Islington in 1711 and in his will, he was listed as a "citizen and stationer of London." John Clavell (1601-1643) was an English highwayman, author, lawyer, and doctor. In 1625, Clavell was imprisoned in King's Bench Prison as a convicted felon. After serving his time in 1627, he was apprehended, found guilty and sentenced to death. He was pardoned in 1627, thanks to the King and Queen. He fled to Ireland where he married a Dublin heiress, who was...
Another 138 words (10 lines of text) are included under the topic Early Clavile Notables in all our PDF Extended History products and printed products wherever possible.

Migration of the Clavile family