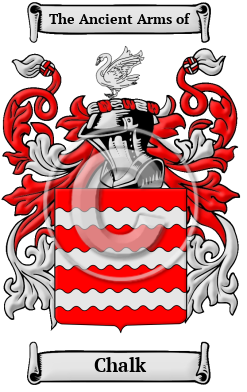 The ancestry of the name Chalk can be traced back to the Anglo-Saxon tribes of Britain. It is a name for a whitewasher. Medieval buildings weren't painted, for paint was very expensive in the Middle Ages. Instead, they were whitewashed; covered in a paint-like emulsion of lime. It served to protect the houses against water, as well as look better. However, it didn't last very long; houses needed to be whitewashed at least twice a year, in the spring and fall. A "chalker" was a professional whitewasher; the name was originally derived from the Old English word cealcian, which meant "to whiten." [1]

Alternatively, the name could have been a topographic name for "someone who lived on a patch of chalk soil." [1] And finally, another source presumes that the name was "well known earth; a locality. Chalk, Saxon, a servant or attendant." [2]

Early Origins of the Chalk family

The surname Chalk was first found in Kent, in the parish of Chalk, in the union of North Aylesford, hundred of Shamwell where "this name is principally found, there is a parish and a hundred so designated, and there is also in county Wiltshire, a parish called Broad-Chalk." [3]

More recently, Chalk is a suburb which adjoins the east of Gravesend, Kent. The place name is derived from the Old English word Cealc and was listed as Cealca [4] in the 10th century and as Celca [5] in the Domesday Book. "The church is very ancient, and has various figures carved over the entrance, the origin and meaning of which have caused much controversy." [6]

Early History of the Chalk family

Chalk has been spelled many different ways. Before English spelling became standardized over the last few hundred years, spelling variations in names were a common occurrence. As the English language changed in the Middle Ages, absorbing pieces of Latin and French, as well as other languages, the spelling of people's names also changed considerably, even over a single lifetime. Many variations of the name Chalk have been found, including Chalk, Chaulk, Chaulke, Chaulkey, Chalke, Chalker, Chalkley, Caulk, Caulke, Kalke and many more.

Notables of the family at this time include John Chalkhill (fl. 1600), poet, was the author of a work which was published under the title of 'Thealma and Clearchus. A Pastoral History in smooth and easie Verse. Written long since by John Chalkhill, Esq., an Acquaintant and Friend of Edmund Spencer,' London, 1683, 8vo. [9] Thomas Chalkley (1675-1741), English Quaker, was the son of George Chalkley, a Quaker tradesman in Southwark, was sent to a day school when nine years old. "Chalkley was fond of gambling till, when he was ten years old...
Another 92 words (7 lines of text) are included under the topic Early Chalk Notables in all our PDF Extended History products and printed products wherever possible.

Chalk migration to the United States +

In an attempt to escape the chaos experienced in England, many English families boarded overcrowded and diseased ships sailing for the shores of North America and other British colonies. Those families hardy enough, and lucky enough, to make the passage intact were rewarded with land and a social environment less prone to religious and political persecution. Many of these families became important contributors to the young colonies in which they settled. Early immigration and passenger lists have documented some of the first Chalks to arrive on North American shores:

Chalk Settlers in United States in the 17th Century

Chalk Settlers in United States in the 18th Century

Chalk Settlers in United States in the 19th Century

Chalk Settlers in United States in the 20th Century

Chalk Settlers in Canada in the 18th Century

Chalk Settlers in Canada in the 19th Century

Chalk Settlers in Canada in the 20th Century

Chalk Settlers in Australia in the 19th Century

Historic Events for the Chalk family +