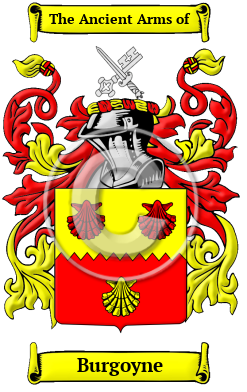 Early Origins of the Burgoyne family

Farther to the north in Yorkshire, the Yorkshire Poll Tax Rolls of 1379 included an entry for Elizabet de Burgon. [5]

"William Burgoyn was chamberlain of the city of Exeter in 1496, and William Burgoyn was sheriff of that city in 1537. In the 16th and 17th centuries a gentle family of Burgoin resided at Bideford; and in the reign of George I., Thomas Burgoyne was a Bideford gentleman. In fact, as far back as the time of Henry VIII., Jeofferie Burgin was a Bideford townsman. During the 16th and 17th centuries a gentle family of Burgoin flourished in the hamlet of Zeal near South Tawton. Robert Burgoine, Esq., was a Tiverton churchwarden in 1654. In the 13th century this name, in the forms of Burgoyn and Burgoyne, occasionally preceded by "De," occurred in Bedfordshire, Cambridgeshire, Gloucestershire, and Somerset. The Burgoyns in the east of England were at that distant period important families, and it is stated by most of the Devonshire antiquarians and historians that the Devonshire stock hailed originally from Bedfordshire. If this is true, the migration must have occurred at a very early date, since not only, as I have observed above, were high official positions in the city of Exeter held by the Burgoyns in the reigns of Henry VII. and Henry VIII., a circumstance itself not indicative of recent immigration, but as far back as the reign of Edward I. the name was represented in the west of England in the counties of Somerset and Gloucester." [7]

Early History of the Burgoyne family

Multitudes of spelling variations are a hallmark of Anglo Norman names. Most of these names evolved in the 11th and 12th century, in the time after the Normans introduced their own Norman French language into a country where Old and Middle English had no spelling rules and the languages of the court were French and Latin. To make matters worse, medieval scribes spelled words according to sound, so names frequently appeared differently in the various documents in which they were recorded. The name was spelled Burgon, Burgoin, Burgunie, Burgoyne, Burgoyn, Burgoigne, Burgane, Burgin and many more.

Outstanding amongst the family at this time was Thomas Burgane, a prominent landholder in Scotland in the 16th century; and Sir John Burgoyne (c.1592-1657) 1st Baronet, an English politician, Member of Parliament for Warwickshire (1645-1648), supported the Parliamentarian cause in the English Civil War. John Burgoyne (1722-1792), the English dramatist and general, was the only son of, Captain John Burgoyne, a man of fashion, who died in the rules of the king's bench, and grandson of Sir John Burgoyne, bart., of Sutton Park, Bedfordshire. He was educated at Westminster School, where he made friends with Lord Strange, eldest son of the Earl...
Another 135 words (10 lines of text) are included under the topic Early Burgoyne Notables in all our PDF Extended History products and printed products wherever possible.

In the United States, the name Burgoyne is the 16,233rd most popular surname with an estimated 2,487 people with that name. [8]

Burgoyne migration to the United States +

Because of this political and religious unrest within English society, many people decided to immigrate to the colonies. Families left for Ireland, North America, and Australia in enormous numbers, traveling at high cost in extremely inhospitable conditions. The New World in particular was a desirable destination, but the long voyage caused many to arrive sick and starving. Those who made it, though, were welcomed by opportunities far greater than they had known at home in England. Many of these families went on to make important contributions to the emerging nations of Canada and the United States. Analysis of immigration records indicates that some of the first North American immigrants bore the name Burgoyne or a variant listed above:

Burgoyne Settlers in United States in the 19th Century

Burgoyne Settlers in Canada in the 18th Century

Burgoyne Settlers in Australia in the 19th Century

Burgoyne Settlers in New Zealand in the 19th Century

Historic Events for the Burgoyne family +