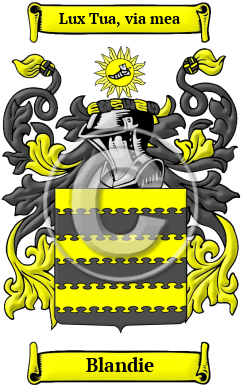 The ancient Normans that arrived in England following the Conquest of 1066 are the initial ancestors from which the many generations of the Blandie family have grown. The name Blandie was given to a member of the family who was a person with blond hair having derived from the Anglo-Norman French word blunt, which means blond. [1]

Early Origins of the Blandie family

The surname Blandie was first found in Suffolk where the Blounts or Blunts, as they are more modernly called, trace their heritage to the Normans, specifically to Rudolph, Count of Guisnes, who nobly assisted Duke William of Normandy to conquer the Saxons at Hastings, in 1066. Sir Robert de Blount (c.1029-1066) had command of the Conqueror's ships during the invasion and was amply rewarded. Sir William, his brother, commanded his foot soldiers at Hastings. [2]

These two great nobles received lands in Suffolk, Sir Robert became Baron of Ixworth, Lord of Orford Castle, and Sir William got seven lordships at Saxlingham in the county of Sussex. Each of these branches flourished and there is a record of each succeeding Baron in each estate. Both are recorded in the Domesday Book with their various properties. [3]

John de Blund or Blunt (c. 1175-1248), Chancellor of York, was one of the leaders of the movement for the restoration of the university of Oxford to its ancient position as a seat of learning. He was Archbishop of Canterbury-elect in 1232. [4]

In Scotland, the name is more often than not a variant of Blund. John le Blunt of Eskeby from Dumfriesshire, rendered homage to King Edward I of England in 1296. Interestingly, Hugh de Abirbuthenoth, who gifted the church of Garuoch to the monastery of Arnbroath in 1292, was commonly designated Hugo Blundus or Le Blond, from the flaxen color of his hair. However, the first record in Scotland was sometime before 1200 when Rodbert Blundus witnessed a charier by Roger de Quenci. Later Adam Blundus witnessed a confirmation charter by the Chapter of Brechin c. 1212-1218. John Blund who witnessed a charter by Matilda, countess of Angus, c. 1242-1248 is probably the John Blundus who appears as a charter witness in Brechin in 1267. [5]

Ascelina le Blund, or Blunt was listed in Norfolk in 1272 [7] and John le Blont, was listed in Somerset, 1 Edward III (during the first year of Edward III's reign.) [8] The Yorkshire Poll Tax Rolls of 1379 included: Johannes Blont; and Ricardus Blont. [6]

Later, Robert de Houton was rector of the church of St. Elphin, Warrington, Lancashire and was confirmed the 3rd of April 1330. [9]

Early History of the Blandie family

The English language only became standardized in the last few centuries. For that reason, spelling variations are common among many Anglo-Norman names. The shape of the English language was frequently changed with the introduction of elements of Norman French, Latin, and other European languages; even the spelling of literate people's names were subsequently modified. Blandie has been recorded under many different variations, including Blount, Blunt, Blond, Blonde, Blund and others.

Outstanding amongst the family at this time was Sir Thomas Blount (d. 1400), supporter of Richard II; Sir Walter Blount (died 1403), soldier and supporter of John of Gaunt (Duke of Lancaster), served as the royal standard bearer, mistaken for the king and killed in combat, appears as a character in Shakespeare's play Henry IV, part 1; Sir James Blount (d. 1493), English commander of the fortress of Hammes; Elizabeth Blount (1502-1540), mistress of Henry VIII; Mountjoy Blount, 1st Earl of Newport (c. 1597-1666), created Baron Mountjoy in the Irish peerage (1617); Charles Blount (1563-1606), English Earl of Devonshire; Charles Blount...
Another 162 words (12 lines of text) are included under the topic Early Blandie Notables in all our PDF Extended History products and printed products wherever possible.

Migration of the Blandie family to Ireland

Some of the Blandie family moved to Ireland, but this topic is not covered in this excerpt.
Another 45 words (3 lines of text) about their life in Ireland is included in all our PDF Extended History products and printed products wherever possible.

Migration of the Blandie family

To escape the uncertainty of the political and religious uncertainty found in England, many English families boarded ships at great expense to sail for the colonies held by Britain. The passages were expensive, though, and the boats were unsafe, overcrowded, and ridden with disease. Those who were hardy and lucky enough to make the passage intact were rewarded with land, opportunity, and social environment less prone to religious and political persecution. Many of these families went on to be important contributors to the young nations of Canada and the United States where they settled. Blandies were some of the first of the immigrants to arrive in North America: John Blunt, who came to Virginia in 1652; Charles, Christopher, and Joanne Blunt, who came to Jamaica in 1663; John Blount who settled in North Carolina in 1675.

Motto: Lux Tua, via mea
Motto Translation: Thy light is my way.