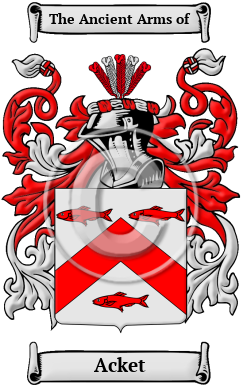 The English name Acket was a patronymic for "the name of an ancestor as in 'the son of Hake.' Though forgotten now Hake, Haket, and Hacon were very familiar in the surname period. Hake still survives in Yorkshire as Haggitt (compare Hick and Higg), more generally Hackett. " [1]

Early Origins of the Acket family

The surname Acket was first found in Berkshire where Walter Achet was listed in the Domesday Book of 1086. [3] [4]

Later in Lincolnshire the following records appeared as a forename: Haket de Rodefort (c. 1160-1166); and Haket filius Clas found in the Feet of Fines in 1193. Early Durham records listed Ralph Hacget in 1131. Rolland Haget, Haket, was listed in 1158 and 1179 in the Pipe Rolls of Yorkshire and Lincolnshire and Geoffrey Haget, Hachet was listed in the Pipe Rolls for Yorkshire in 1191. [2]

In the Hundredorum Rolls of 1273 we found: Mabil Haket, Lincolnshire; Ralph Haket, Buckinghamshire; and Robert Haket, London who were all listed as holding in their respective counties at that time. Later the Yorkshire Poll Tax Rolls of 1379 included: Thomas Haket; and Johanna Haket. [1]

According to Testa de Nevill, sive Liber Feodorum, temp. Henry III-Edward I., Rolland Haket in Lincolnshire held lands there from the reigns of Henry III to Edward I. [5]

John Haget was listed in Somerset and Roger Haket in Lincolnshire, 1 Edward III (during the first year of the reign of King Edward III.) [6]

Further to the north in Scotland, "Sir Henry Hakette witnessed a charter by Henry de Graham, c. 1230. Richard Haket was juror on inquisition at Dumfries, 1259, and Sir Walter Haket was in the service of Robert de Brus, Earl of Carrick, 1298." [7]

Early History of the Acket family

Intuition and sound were the primary sources medieval scribes used to judge appropriate spellings and translations for names. The spelling of a name thus varied according to who was doing the recording. The different spelling variations of Acket include Hackett, Haggitt, Haggett, Haket, Acket, Acketts and others.

Distinguished members of the family include John Hacket (1592-1670), Bishop of Coventry and Lichfield, was born in St. Martin's, Strand, 1 Sept. 1592. His father, Andrew Hacket, a prosperous tailor of Scottish extraction, was a senior burgess of Westminster, and was noted for a strong attachment to the church of England. [8] Roger Hacket (1559-1621), was an English divine, son of Sir...
Another 61 words (4 lines of text) are included under the topic Early Acket Notables in all our PDF Extended History products and printed products wherever possible.

Acket migration to the United States +

In their new home, Scots found land and opportunity, and some even fought for their new freedom in the American War of Independence. Some, who remained loyal to the crown went north to Canada as United Empire Loyalists. In this century, the ancestors of both of these groups have begun recovering their illustrious national heritage through Clan societies and other Scottish historical organizations. Early immigration and passenger lists indicate many people bearing the Acket name:

Acket Settlers in United States in the 19th Century