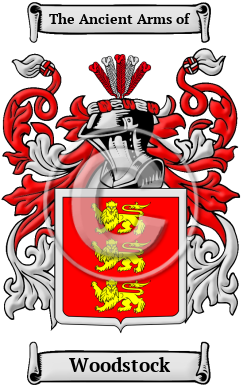 The Anglo-Saxon name Woodstock comes from when the family resided in Woodstock, a town in the north-west part of Oxfordshire.

Early Origins of the Woodstock family

The surname Woodstock was first found in Oxfordshire at Woodstock. "This town is of Saxon origin, and was called by that people Vudestoc, signifying a woody place. It appears to have been chosen at an early period as an abode of royalty, and the manor-house, as it was called, is supposed to have been built upon the site of a Roman villa. Edmund of Woodstock, the second son of Edward I., was born here; as were also Edward the Black Prince, and Thomas of Woodstock, sons of Edward III. Henry VII. added considerably to the buildings of the palace, erecting the front and the principal gate-house." [1]

"Edmund of Woodstock, Earl of Kent (1301-1330), youngest son of Edward I, by his second wife, Margaret of France, was born at Woodstock on 5 Aug. 1301. On 31 Aug. 1306 he received from his father a revenue of seven thousand marks a year. It was commonly believed that the old king proposed to confer the rich earldom of Cornwall either on Edmund or on his elder brother Thomas of Brotherton; but the accession of Edward II secured that prize for the favourite, Gaveston. Edward II, however, placed Edward Baliol in the custody of his half-brother. In 1319 he made Edmund lord of the castle and honour of Knaresborough." [2]

The Feet of Fines for Oxfordshire included Alisius de Wodestoke in 1235. [3]

Robert Wodestoke was found in the Assize Rolls for Devon in 1359 [3] and another source notes: "Lifton, which adjoins Marystow, one of the frontier parishes of Devon next Cornwall, passed from the Crown, by the grant of King John in 1199, to Agatha, who had been nurse to Eleanor his mother. By Edward I. the manor, hundred, and advowson were given to Thomas of Woodstock, and descended thence through the Hollands to the Nevilles." [5]

Early History of the Woodstock family

This web page shows only a small excerpt of our Woodstock research. Another 64 words (5 lines of text) covering the years 1326, 1331, 1331, 1330, 1326 and 1385 are included under the topic Early Woodstock History in all our PDF Extended History products and printed products wherever possible.

Before English spelling was standardized a few hundred years ago, spelling variations of names were a common occurrence. Elements of Latin, French and other languages became incorporated into English through the Middle Ages, and name spellings changed even among the literate. The variations of the surname Woodstock include Woodstock, Woodstocke and others.

Notables of this surname at this time include: Edmund of Woodstock, 2nd Earl of Kent (c. 1326-1331), who inherited the Earldom of Kent in 1331, a year after his father, Edmund of Woodstock, 1st Earl of Kent, was attainted. In 1330 he was, on the petition of his mother and the reversal of his father's condemnation, recognized as Earl of Kent. He died very...
Another 63 words (4 lines of text) are included under the topic Early Woodstock Notables in all our PDF Extended History products and printed products wherever possible.

Woodstock migration to the United States +

Woodstock Settlers in United States in the 17th Century

Woodstock Settlers in United States in the 18th Century

Woodstock Settlers in Australia in the 19th Century

Woodstock Settlers in West Indies in the 17th Century