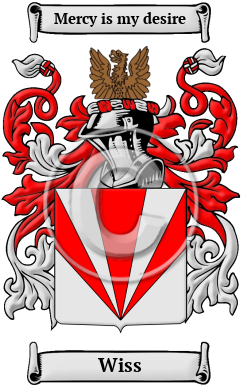 It was in the Scottish/English Borderlands that the Strathclyde-Briton people first used the ancient name Wiss. It was a name for someone who lived in Stirling.

Early Origins of the Wiss family

The surname Wiss was first found in Stirlingshire, where they held a family seat from very ancient times. William Wishart had a grant of the mill from the Abbey of Cambus Kenneth in the year 1200, and was associated with lands at Conon and Tulloch in 1254. Another William Wishart was a monk at St. Andrews in 1250. The family also held the lands of Kenny Murchardyn in 1279. Sir John Wishart rendered homage in 1296 to King Edward I of England on his brief conquest of Scotland. [1]

"Andrew Wycchard (Wyschard or Wychard) of Scotland, a prisoner of war in Hereford Castle, 1305-07. George Wischart was burned for heresy at St. Andrews, 1545/6, and a later George Wischart was first bishop of Edinburgh after the Restoration and private chaplain and biographer of the marquess of Montrose." [1]

"The family are of ancient date in Forfarshire, and are descended from Robert, a natural son of David, Earl of Huntingdon, who having gone on a crusade to the Holy Land, was called Guishart, on account of the slaughter he made of the Saracens. Adam Wishart of Logie, was living in 1272." [2]

"Some ancient writers say, that Robert, son of David, Earl of Huntingdon, took on him the cross, and distinguished himself in the Holy Land, where, from his gallant exploits against the Saracens, he received the name of Guis-hart, that is, Wise-heart, now Wishart." [3]

Robert Wishart (d. 1316), was Bishop of Glasgow and belonged to the family of Wishart or Wiseheart of Pittarrow, Forfarshire, and was either nephew or cousin of William Wishart, bishop of St. Andrews and chancellor of Scotland. [4]

Much further to the south in England, and much earlier Wigheard, Wighard, or Vighard (d. 664), was Archbishop-elect of Canterbury, a Kentish priest and one of Deusdedit's clergy. "He was nominated to the archbishopric with the assent of the English church by the kings Oswy and Egbert, and was sent, bearing gold and silver vessels, to Rome for consecration. He died of the plague in Rome in 664, before his consecration. " [4]

Early History of the Wiss family

Surnames that evolved in Scotland in the Middle Ages often appear under many spelling variations. These are due to the practice of spelling according to sound in the era before dictionaries had standardized the English language. Wiss has appeared as Wishart, Wishard, Wychart, Wisehart, Wisheart, Wiseheart and many more.

Notable amongst the family at this time was George Wishart (c.1513-1546) famous reformer and martyr. In 1538, while a schoolmaster at a grammar school in Montrose, he incurred a charge of heresy for teaching the Greek New Testament. After spending some time on the continent, he was sent back to Scotland by Henry VIII to negotiate a marriage contract between Prince Edward and Mary, Queen of Scots. In 1546 he was again arrested and burned at St. Andrews. He was the first to inspire John Knox. [4] Sir John Wishart (d. 1576)...
Another 90 words (6 lines of text) are included under the topic Early Wiss Notables in all our PDF Extended History products and printed products wherever possible.

Migration of the Wiss family to Ireland

Some of the Wiss family moved to Ireland, but this topic is not covered in this excerpt. More information about their life in Ireland is included in all our PDF Extended History products and printed products wherever possible.

Wiss migration to the United States +

Wiss Settlers in United States in the 18th Century

Wiss Settlers in United States in the 19th Century