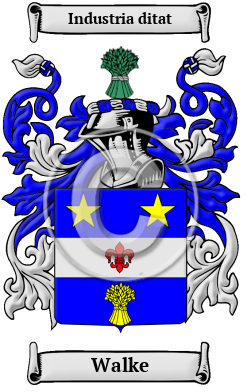 Early Origins of the Walke family

The surname Walke was first found in Dumfriesshire, where they held a family seat in Wauchopedale from about the year 1150. Robert de Wauchope was one of twelve knights who negotiated the law of the border territories in 1249.

The abbreviation of Waugh created a separate branch of the Clan, and David Waugh of Lanarkshire, Robert Waugh of Heap, rendered homage to King Edward I of England on his brief conquest of Scotland in 1296. This latter person may have been the same as Robert de Wauchope who also rendered homage for the Wauchopes. [1]

"The border name of Waugh is an abbreviation of Wau-chope, the Waughs are sprung from the Wauchopes and have the same arms." [1]

Later some of the family we found across the border in England, where Willelmus Wahh was registered in the Yorkshire Poll Tax Rolls of 1379. [2]

"The Waughs, who are now established in England in the counties of Northumberland and Durham, probably hail originally from the Waughs of the Scottish border counties, where the name still has its home, especially in Roxburghshire and Dumfriesshire. The Waughs of Heip, in Roxburghshire, held those lands from the 13th to the 17th century." [3]

Early History of the Walke family

Spelling variations of this family name include: Waugh, Wauchope, Waughe, Walge, Wach, Walcht and others.

Notable amongst the family at this time was Robert de Wauchope; John Waugh (1656-1734), an English clergyman, Bishop of Carlisle from 1723; and his son, John Waugh who became Dean of Worcester in 1751. Sir John Wauchope (d. 1682), of Niddrie, was a Scottish covenanter, descended from the old family of Wauchope of Wauchope in Dumfriesshire, who became proprietors of the lands of Culter, Aberdeenshire, and from the thirteenth century were hereditary baillies in Mid Lothian to the Keith Marischal of Scotland, afterwards Earl Marischal, from whom they obtained the lands of Niddrie Marischal in that county. Robert Wauchope, great-grandfather of Sir...
Another 132 words (9 lines of text) are included under the topic Early Walke Notables in all our PDF Extended History products and printed products wherever possible.

Migration of the Walke family to Ireland

Some of the Walke family moved to Ireland, but this topic is not covered in this excerpt.
Another 215 words (15 lines of text) about their life in Ireland is included in all our PDF Extended History products and printed products wherever possible.

Walke migration to the United States +

Walke Settlers in United States in the 17th Century

Walke Settlers in United States in the 18th Century

Walke Settlers in United States in the 19th Century

Walke Settlers in New Zealand in the 19th Century