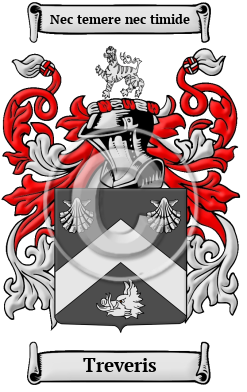 The founding heritage of the Treveris family is in the Anglo-Saxon culture that once dominated in Britain. The name Treveris comes from when one of the family worked as a person who collected a toll from travelers or merchants crossing a bridge. This common practice had the purpose of providing financial resources to maintain the upkeep of the bridge. The surname Treveris is derived from the Old English words travers, travas, traves, and travis. These are all derived from the Old French nouns travers and traverse, which refer to the act of passing through a gate or crossing a river or bridge. [1]

Alternatively the name could have originated in Normandy at Trevieres, between Bayeux and Caen. "The name continued in Normandy, where Ranulph de Chnchamp, after 1138, assumed the name of Travers." [2]

"In the time of the Conqueror, Robert de Travers or d'Estrivers, Baron of Burgh-upon-Sands, married the daughter of Ranulph de Meschines, Lord of Cumberland, and the sister of Ranulph Bricasard, who succeeded his cousin Richard d'Abrincis as Earl of Chester in 1119. He received from his father-in-law the office of Hereditary Forester of Inglewood in fee, which passed through his only child, Ibria, to Ralph de Engayne. This forestership of Inglewood was so honourable, and gave so great command, that there is no wonder the family should wish by every means to set forth their claim to it" [3]

Early Origins of the Treveris family

The surname Treveris was first found in Lancashire where they held a family seat from very ancient times, at Mount Travers, some say before the Norman Conquest in 1066.

The Manor of Skelmerdale in Lancashire proved to reveal some interesting details about the family. According to the Domesday Book, it was originally held by Uctred, who also held Dalton and Uplitherland. Later it was part of the forest fee, held by the Gernet family. "The first of them known to have held it, Vivian Gernet, gave Skelmersdale and other manors to Robert Travers; these were held in 1212 by Henry Travers under Roger Gernet." [4] The manor passed on to the Lovels, but they lost it later after the forfeiture in 1487.

Other early records include Walter de Travers who was listed in Hodgson's History of Northumberland in 1219 and two listings in the Hundredorum Rolls of 1273: Hugh Travers in Lincolnshire; and Nigel Travers in Buckinghamshire. Later the Yorkshire Poll Tax Rolls of 1379 listed Robertus Trauers. [5]

The township of Nateby was an early home to this distinguished family. "This township is said to have been in the tenure of the family of Travers, of Tulketh, so far back as the reign of Henry I.; Laurence Travers, who lived soon after that reign, was succeeded by eleven generations, and Nateby appears in possession of William Travers in the reign of Elizabeth." [6]

Early History of the Treveris family

The first dictionaries that appeared in the last few hundred years did much to standardize the English language. Before that time, spelling variations in names were a common occurrence. The language was changing, incorporating pieces of other languages, and the spelling of names changed with it. Treveris has been spelled many different ways, including Travers, Traverse, Travis, Traviss and others.

Notables of this surname at this time include: Sir Henry Travers of Monkstown Castle whose daughter married the Viscount Baltinglass; and Walter Travers (1548?-1635), an English Puritan theologian, chaplain to William Cecil, 1st Baron Burghley, Provost of Trinity College, Dublin from 1594...
Another 41 words (3 lines of text) are included under the topic Early Treveris Notables in all our PDF Extended History products and printed products wherever possible.

Migration of the Treveris family to Ireland

Some of the Treveris family moved to Ireland, but this topic is not covered in this excerpt.
Another 137 words (10 lines of text) about their life in Ireland is included in all our PDF Extended History products and printed products wherever possible.

Migration of the Treveris family

Thousands of English families in this era began to emigrate the New World in search of land and freedom from religious and political persecution. Although the passage was expensive and the ships were dark, crowded, and unsafe, those who made the voyage safely were rewarded with opportunities unavailable to them in their homeland. Research into passenger and immigration lists has revealed some of the very first Treveriss to arrive in North America: Walter Travis, who came to Virginia in 1637; John Traviss settled in Maryland in 1734; Joseph Travis, who settled in Maryland in 1738; Robert Travers, who settled in Placentia, Newfoundland, in 1744.